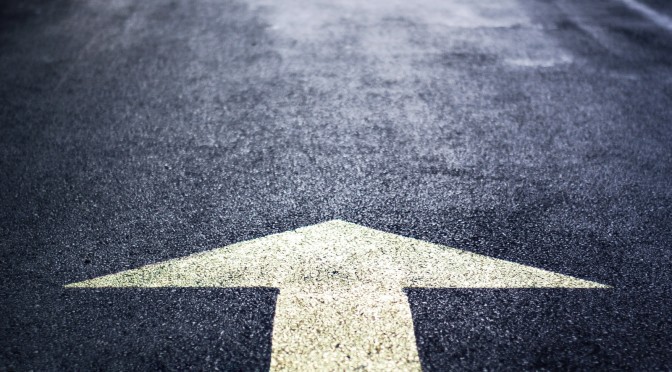 Rules are the building blocks of all games, providing all the structure and boundaries to which players consent. Yet they can quickly become the most frustrating aspects of a game. The task of reading and memorizing a textbook-sized list of rules for more complicated games intimidates many players, particularly new ones. As players discuss and try to parse out poorly-organized rules, a game can come to a standstill, breaking what we would see as “immersion” or “fun.” While much has been written on the need to playtest to discover a game’s feedback loops (e.g., how a player multiplies his/her in-game rewards) and dominant strategies (i.e., a strategy that defeats all other options) in games, vague rules still plague the best of games, especially in games where specific rules (i.e., rules on individual cards) may contradict the general rules of the game. It is thus important to write rules in clear, understandable, and easily referenced manner to allow players enjoyment of the game. 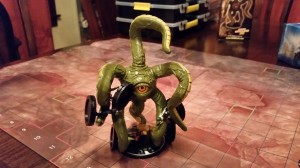 One game plagued by vague rules is the Heroclix collection of collectable miniature combat games, in which comic book heroes and villains battle each other utilizing various superpowers. Collectable games that sell individual components in booster packs such as Magic: The Gathering and Heroclix  are often prone to open rules conflicts, due to booster packs’ constant introduction of new elements. Players must frequently consult the directions, deliberate with others about vague rules, and adjust meta-game strategies – emergent strategies of the player community beyond the strictures of the game – as certain elements of a game privilege certain modes of play over others. At best, poorly-written rules and abilities receive attention from the community of players itself, which leads to errata, or rules published after the initial release. These errata then become paratextual references outside of the rules themselves, and increase the difficulty of comprehending the game. Acting as rules arbitrators, the Heroclix HCrealms community dedicates whole sections of their discussion forums to game rules and player interactions with these rules. Often, game judges must search and read pages of discussion to discover how a particular game element interacts with other game elements. If an issue is not discussed, players must post a new discussion in the forum to seek clarification. The HCrealm forums, specifically the unit rulings thread, also constitute the main archive of these rulings. 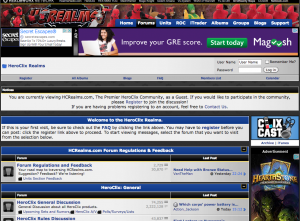 The HCRealms Forum homepage. Screen capture taken on 5 October 2014 by the editors.

The HCRealms forums represent a needed communication channel between the designers of the game and its community, patching up points where the rules have failed to provide clear, unambiguous instructions. Game designers focus on the ability of rules to work in conjunction with each other, and achieve a specified game “aesthetic.” While flow, engagement, and fun are always the primary goals of games, the comprehension of rules remains essential to those goals. Players’ experiences could be greatly improved with some general principles of design applied to the crafting and presentation of rules. Below, I suggest some principles of design and instruction to improve legibility, reviewability, and comprehension of rules.

Designers often craft a series of statements that form the rules. These statements are often presented in paragraph formats, with the designer describing the elements and defining terms used in a game. However, those with experience in writing legal documents, where meaning and interpretation carry the upmost importance, sympathize with the difficulty in writing something that is both easy to comprehend, yet unambiguous. Game designers utilize the tricks of various forms of media including text, web videos, and interactive flash presentations to communicate the basic rules of a game. Three areas which make a large impact on making rules clear and easy to read are chunking, figures, and flowcharts. 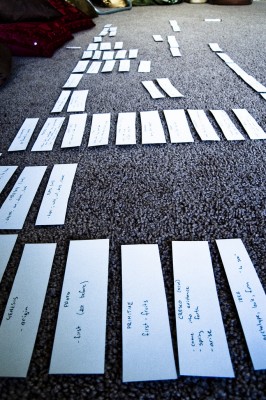 Chunking is one of the simplest and most common ways of taking complex sets of rules and organizing them to make them easier to memorize and reference. William Lidwell, Kritina Holden and Jill Butler define “chunks” as the following:

While much debate surrounds the precise optimal number of chunks our memory can handle, fewer chucks generally mean easier recall by readers. For this reason, gameplay containing a long series of steps will often be broken into phases, converting chunks to more manageable lists. Examples of chunking a series of steps in a turn can be found in Magic: The Gathering’s phase system, Dungeons and Dragons, and the board game Agricola, among others. In most editions of Dungeons and Dragons, for example, fighting requires a pre-combat chunk that establishes who is aware of the enemy, an initiative chunk to establish turn order, and finally a combat chunk for actions to be taken. This allows the dungeon master to be aware of specific rules for each chunk, and give considerations to each player at the table in turn. Agricola similarly uses chunks so that important game events are not ignored. Chunks also allow each player ample time to consider the strategy they will use that turn. Its chunks are divided into: start the round, replenish, work, return home, and harvest. Each of the phases are further chunked in the rules to sub-phases, all of which must be followed to ensure fair play. 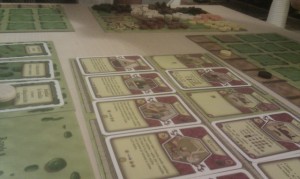 Cards from the Agricola board game. Photo CC 18r @flickr

This technique also often reflects the aesthetic basis for a game. For example, many tabletop role-playing games feature a large set of rules and terms for defining the abilities of one’s character and their application. While there are rules regarding how capable the character is in combat, we chunk the rules into “combat” sections rather than “character creation.” Chunking also works well on smaller-scale games such as war, poker, or backgammon. Many board games will chunk their setup rules separately from the game sequence rules just for this reason.

The proper number of chunks needed for any particular set of rules is a compromise between its subject matter and a player’s limits on memory. Complex games, such as war and empire-building games, rely on reference cards for players to remember chunks and their contents, since the game has an otherwise high cognitive load. In best practice, chunks are easy to find, and organized via lists and outlines. 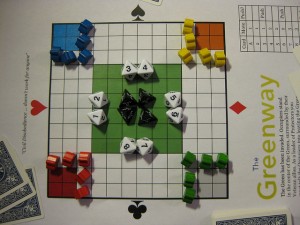 An example figure from the board game The Greenway. Picture CC Rik Eberhardt @flickr.

A great rulebook is one that shows as well as tells. Figures such as photographs of the initial game setup may be necessary in some games in order to convey placement without resorting to onerous and confusing details.  However, such images also prove vital in examples of gameplay, to show the before- and after-states of complicated moves outlined in the rules. Figures and visual examples scaffold the player, providing needed context to the rules and may show how a number of rules interact to create dynamic gameplay. The use of scaffolding techniques is also vital to design in educational video games, as the scaffold provides the needed context and starting point for all players. Figures, diagrams, and examples help when the rules become complicated enough that any chunking remains a difficult proposition. Finally, figures help accommodate those players with different kinds of learning preferences, increasing the game’s appeal to diverse audiences.

Those who utilize figures, however, need to pay special attention to the design principles of comparison, framing, highlighting, and iconic representation. Each of these principles has an impact on developing the user’s mental model of the game itself and how the rules of the game fit into that mental model. Comparison helps the user distinguish between states of the game. A series of figures showing — via comparison — how states change from one point to the next allows the user to mimic and then internalize how a rule is implemented in actual play. Framing provides the context for the player, so that the picture is not just a series of unrelated objects and the placement of game elements makes more sense to the user. Highlighting informs the player of key game elements they might otherwise overlook. Finally, iconic representation is usually used in place of photographic depictions because of the increased clarity and (often) universality of the figure. Rule authors would do well to avoid arbitrary iconic representations, however, as they may confuse players more than help them.

Sid Meier once said “A [good] game is a series of interesting choices.” Choices available to the player can be represented using a flowchart of the decision points. Rules are often misinterpreted around timing and sequencing effects, for which flowcharts often provide the best guidance. Many games feature abilities for different players to enhance the tactical options and aesthetics of a particular choice of play. However, since these abilities need to interact with both the standard rules of play and other players’ abilities, the resolution of said effects must be considered. Magic: The Gathering is such a game in which the state of cumulative effects plays a vital importance. As a response to this design challenge, Magic has developed the gold standard of effect rules: the “stack,” which means the last effect declared is the first to be resolved. Even with this simple rule, resolving effects can be very difficult to parse without a flowchart. 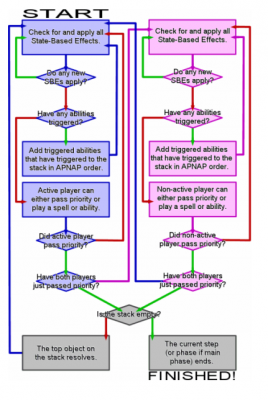 A flowchart also provides the clearest visualization of how to transition between states in a game. They usefully supersede the paragraph format of written rules when dealing with very complex, multi-stage games that require players to act either simultaneously or semi-simultaneously. Despite their usefulness, flowcharts are often not provided within tabletop games. Players usually resort to fan communities that share homemade flowcharts clarifying the rules, again creating a paratextual layer of rules interpretation. Fans archive flowcharts on sites such as Boardgamegeek.com, so that others in the community can find them.

Basic principles of instructional design come into consideration whenever rules to games are created, and certain best practices effectively convey authorial intent to the players. Arguments over rules often appeal to this authorial intent, and unclear communication through unreflective rules design can destroy even the most carefully-designed game. Player misunderstandings are a given in the playing of any game, but they can be minimized and productively channeled through a well laid-out set of rules.