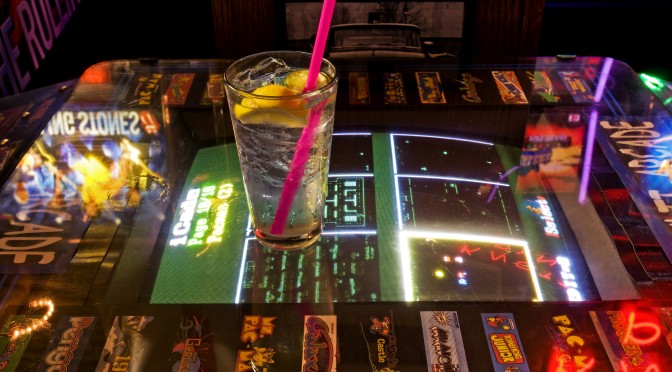 Scene: I’m at Quarters arcade in Hadley, MA sitting at Tapper, the cocktail cabinet edition, pint aglow from beneath as I try to get my bartender to the end of the bar in time to catch empty steins. I take a drink, try to serve a drink. Game Over. My wife comes over and she spreads the alternative weekly across the cabinet. Should we get hot dogs?

If we wanted to understand this scene we would want to know all about Tapper, but not just how I failed to keep up with its virtual patrons. We could move from screen to scene, enacting a shift in objects of study. This is a move from object to subject, from text to reader, from game to player – but it could also be a move from one set of objects to another, toward new kinds of things. Across the academy we see a move to study objects in new ways, not just in the current waves of Speculative Realism and Object Oriented Ontology, but also as part of a longer, slower, material turn. This turn orients us toward things and toward objects, signaling a shift within game studies toward the spaces of the player. Understanding the cocktail cabinet in the context of these shifts adds important material and spatial dimensions to game studies’ readings of characters, mechanics, and settings, along with the technical systems that enable and constrain those phenomena. 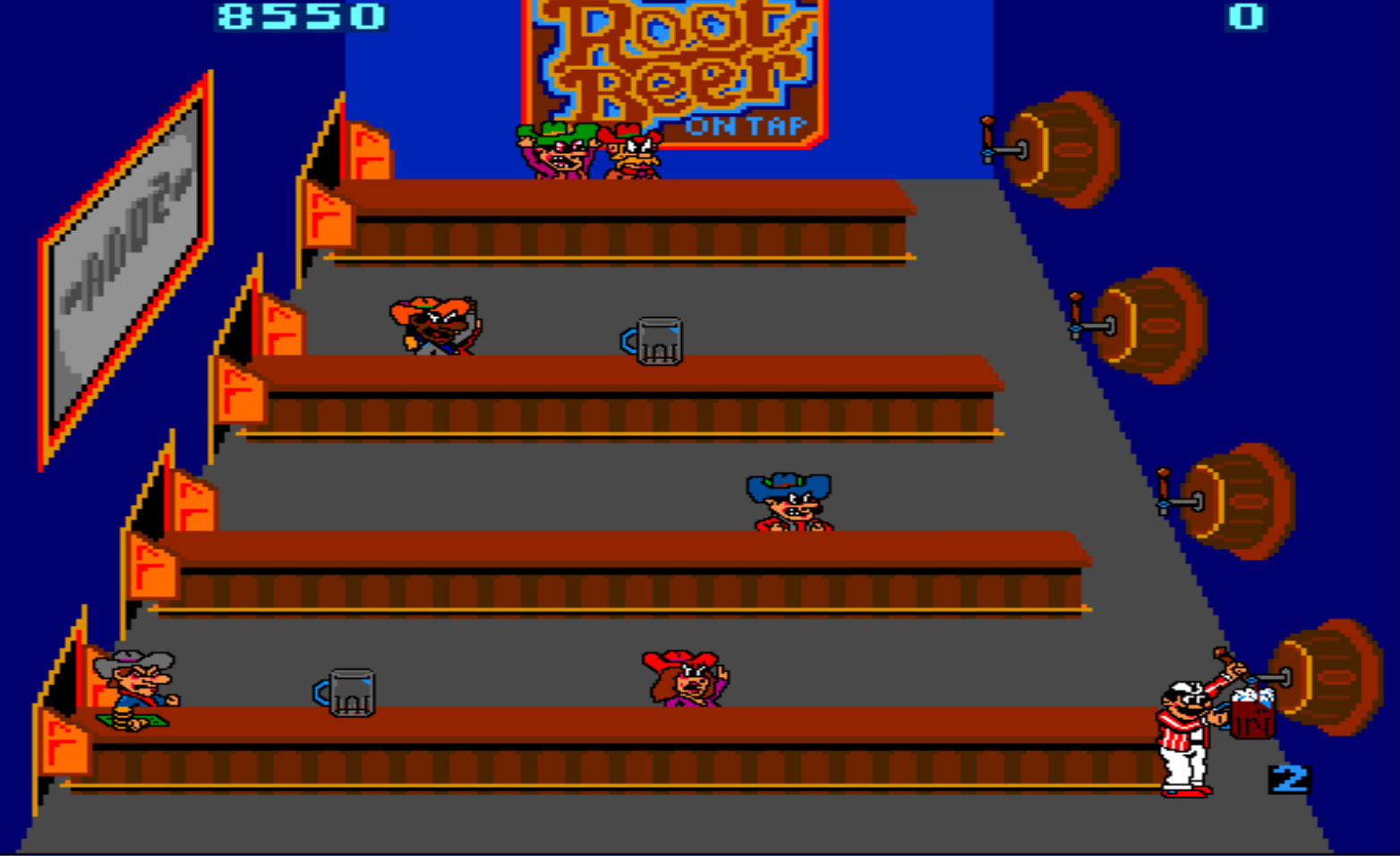 We redefine our objects as we go – to understand the cocktail cabinet from the perspective of players’ bodies, their comportments and postures, their practices, their desires and their attitudes. The cocktail cabinet becomes many things: a table for drinks, an impromptu bench or coatrack, a dinner table, an ashtray, a place to grade papers, to hold hands, to do drugs, light candles, spill drinks, or even a play surface for fully analog games like Connect-4 (1974) and Poker. This isn’t enough; we re-define and re-name our human subjects and objects too. People do many things with these units besides playing (with) them.

What are these activities? Cocktail cabinets are not just tipped-over upright cabinets. Cocktail cabinets are part of a different constellation and genealogy of game tables, descended from the practices of play and sociality that come with them. If we take a step back and look at the posture of a cocktail cabinet player, and not at the game being played, we see a bodily comportment and disposition that goes further back and farther afield than the 1970s birth of the object.

Approached from this perspective we start to pay less attention to the digital nature of the games played through the system. It doesn’t matter so much then whether one is sitting at an 1800s convertible backgammon and chess table, a 1900s green velvet-lined card table, or a 1980s cocktail unit. These tabletop gaming scenarios seem particularly akin to one another when we investigate them as assemblages of bodily and social factors that define a moment of play. These connections might be issues of, for example, the body and its techniques, of control, of training and rhythms, of temporal and spiritual dispositions, or of settings and contexts, in this case modes of public seated play, likely in taverns or cafes. I want to show the ways in which we can trace a different genealogy and trajectory, really a range of them, for the cocktail cabinet. My goal here is not just to challenge the traditional, invention-heavy narratives of arcades and public play– this has been done very well already by, for one, Erkki Huhtamo in his “Slots of Fun, Slots of Trouble” and “From Kaleidoscomaniac to Cybernerd,” where he performs a “media archaeology” of games’ culture and history. Rather, my goal is to contribute to a critique of digital essentialism that amends certain fixations on the digital and computational aspects of video gaming.

This is my critique of game studies’ digital essentialism: it is too narrow, too focused, too on the nose to account for messier contextual approaches. In particular, I am interested in looking at how the genealogy of game tables is also one of leisure, time killing, intoxication, and something like the playful but non-gaming use of game technologies. In looking at how cocktail cabinets, which could be classified as electronic games, are also other things with alternate cultural histories and possibilities, we connect these objects to people and practices from which they would otherwise be artificially cut off. In doing so, we have to (get to?) critique various popular essentialisms and assumptions about them. 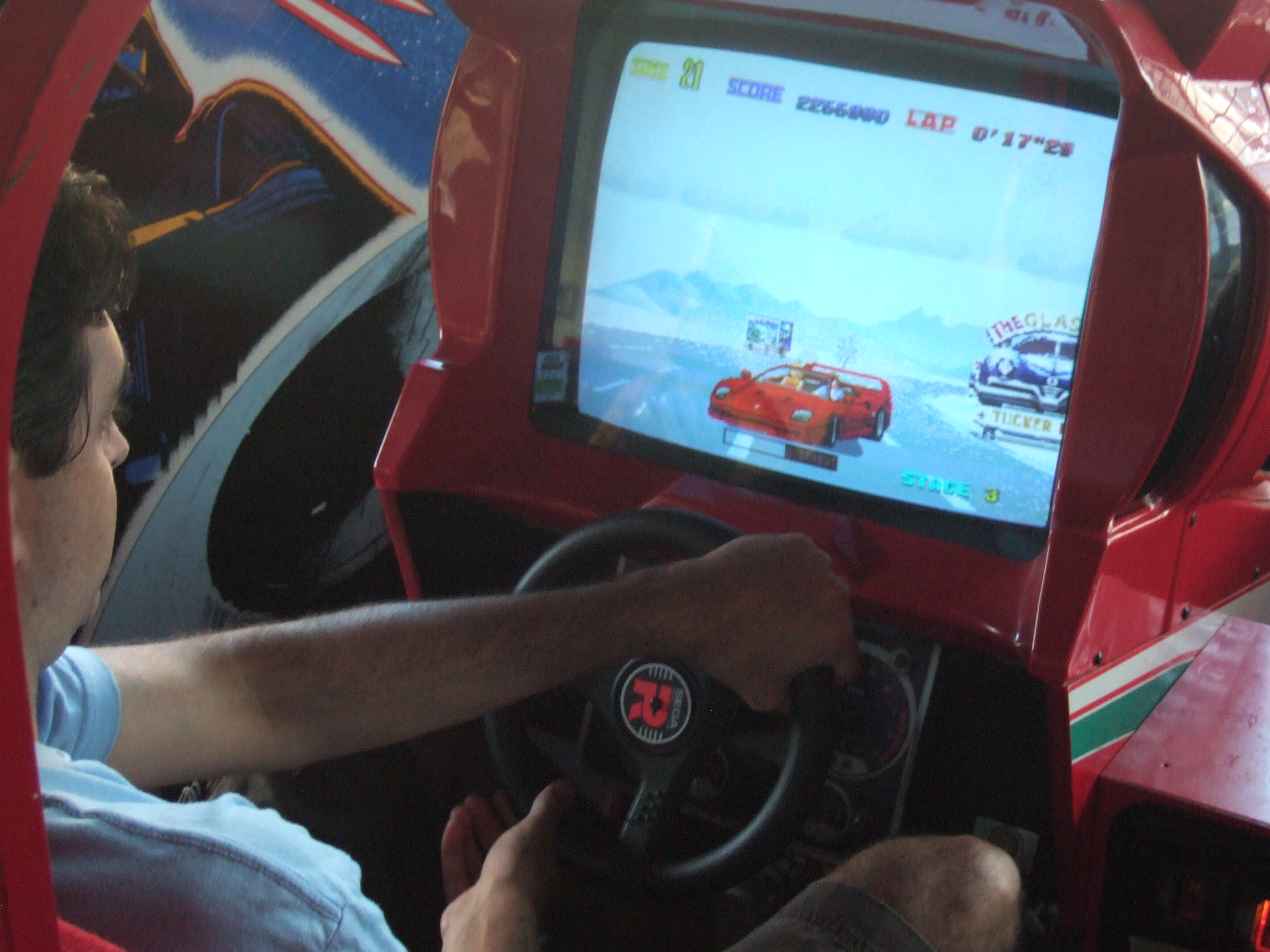 Part of this shift and redefinition is an issue of names. Why not call these cabinets “sit-down models?” The term is used from time to time, but is too broad for my purposes here. Sit-down units could include some kind of sitting inside or astride, common among driving, flying and riding games, likely to feature controls alluding to some form of steering. In short, while you might sit down to play Chase (1976) or Outrun (1986), this is a different kind of sitting, and a different kind of playing than we see among cocktail units.

The acts of sitting and playing are tightly linked in the cocktail unit: the way one does either is informed by the other. The posture of the player is quite different from that of the upright cabinet or ride-game (to say nothing of the home system.) Cocktail cabinets, as I approach them, are distinct from all other game units which might feature upward-facing screens. I echo Kevin Smith’s blog post on the subject, separating “standing around games” from the cocktail form. My focus here is on sit-down, flat, glass- or plastic-topped, screen-up cocktail cabinets. But why “cocktail”?

The designation “cocktail” connects these objects to modes of adult leisure distinct from the frankly over-exposed milieu of the arcade. It also reinforces the table-like aspect of the object, crucial for its multimodal role as locus of drinking, socializing, public leisure and related activities; this is quite separate from a game’s digital or electronic qualities, distinct perhaps from its ludic qualities as well. One need not have a drink, alcohol or otherwise, in order to use these cabinets – but it doesn’t hurt. These are not just game tables, but drinking tables as well. That genealogy, of drinking and playing, of playing while drinking, is a rich one worth unpacking. The connection between play and intoxication is powerful. Indeed, we can learn much about each phenomenon by reading it against its other. It may not matter so much whether play is digital or analog, which may not matter any more than exactly what sort of drink is consumed. These specifics matter to the person drinking or playing, but matter much less in the aggregate. 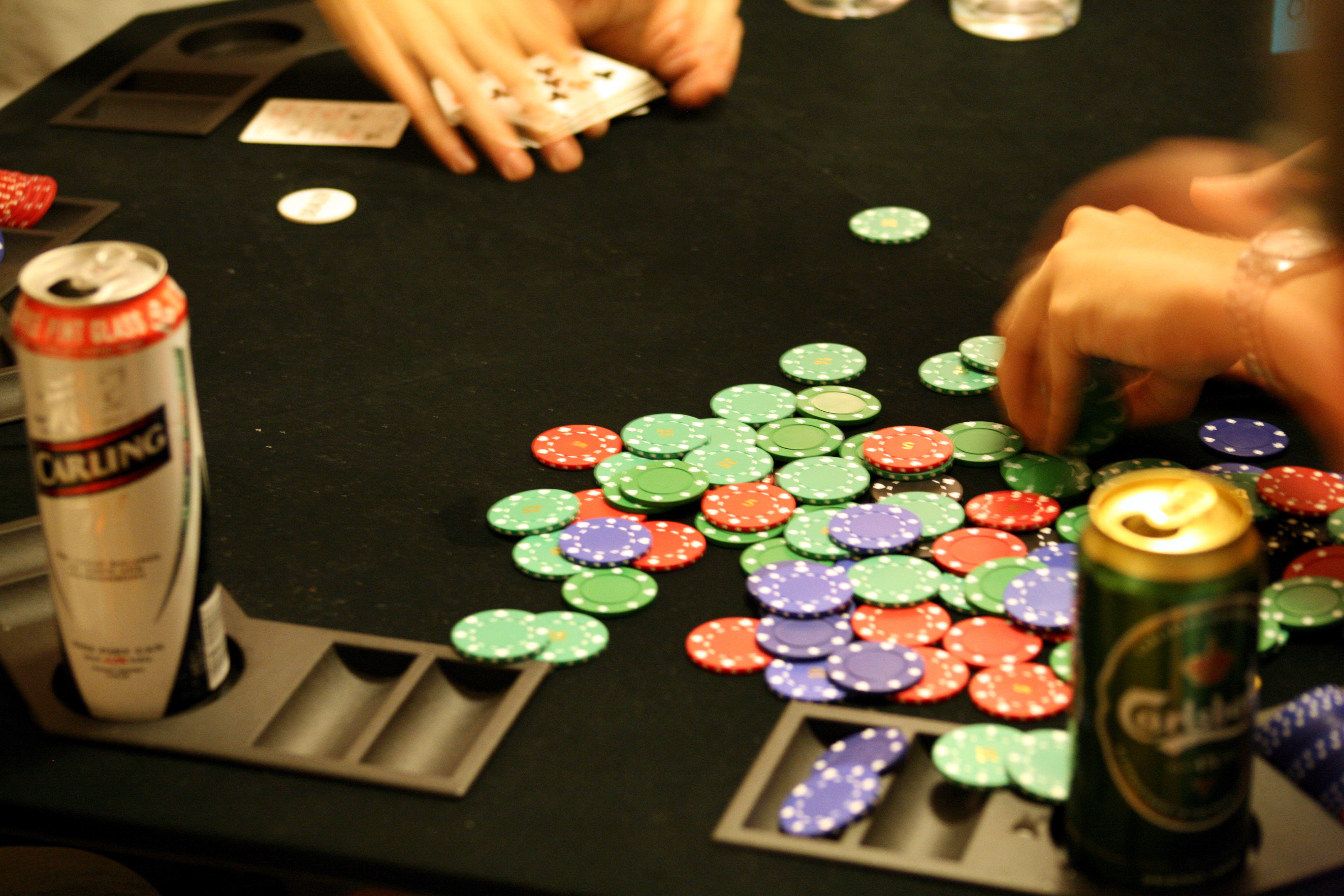 Does it matter if these games were for one or two players? Yes, if we only look at them from the perspective of a player navigating or operating a digital game. On the other hand, the relations between people conducted in and through a digital game are not only that of player and non-player, as James Newman illustrates. The range of not-quite-players, on-lookers, co-players and backseat drivers can be quite complicated. The play that goes on a cocktail cabinet could be verbal as well as digital, teasing as well as offering tips. The active, hands-on-controller player isn’t necessarily the only one playing.

But what if, in certain cases, the players are alone? I’ve been stressing the social nature of these cabinets, but surely they are also played by solitary individuals. Unaccompanied individuals also use cocktail cabinets without playing them. I graded many papers on a cocktail cabinet as a graduate student – that I don’t remember what games they were is telling of my relationship to them. What I remember instead is a scene: my work, a bar in the afternoon, nearly empty; I recall the rhythms of everyday life and the small, pleasing distractions of working on (top of) a game.

So yes, let us move away from fixation on the digital – but let us also try to move away from essentializing games as an object of study. To flatten the videogame, arcade game or cocktail cabinet into an essentially digital object is clearly a problem – but to assume it is also essentially a game is problematic as well. The problem is that when we cast things like cocktail cabinets as games or game systems, we shut out all of the other things that they are, have been, or could be, ignoring the ways in which people relate to games outside of the player position.

If we bring together the object’s past and future, we open up new areas and objects of analysis. We could look at the cabinet’s past as plans, sketches, designs, living trees, particle board, acrylic, copper vein, and coiled wire. We can examine its future too, perhaps as the objects of collection, preservation and curation addressed in Raiford Guins’ book Game After. At a smaller time scale, these things are different after-hours or behind the scenes. Consider the professional and labor relations that repair people, bartenders and cleaning crews have with the cocktail cabinet. In the even tighter context of customer use, think of the rich and complex ways we relate to these things in their bars, restaurants and arcades. Even in these ludically charged contexts, cocktail cabinets go unplayed (much) more often than not. Studying them only (or even primarily) as games or playthings looks less and less tenable when we consider these factors. And yet, even when used as a table for drinking rather than game play, the cocktail cabinet retains some playful qualities. How do we account for this? 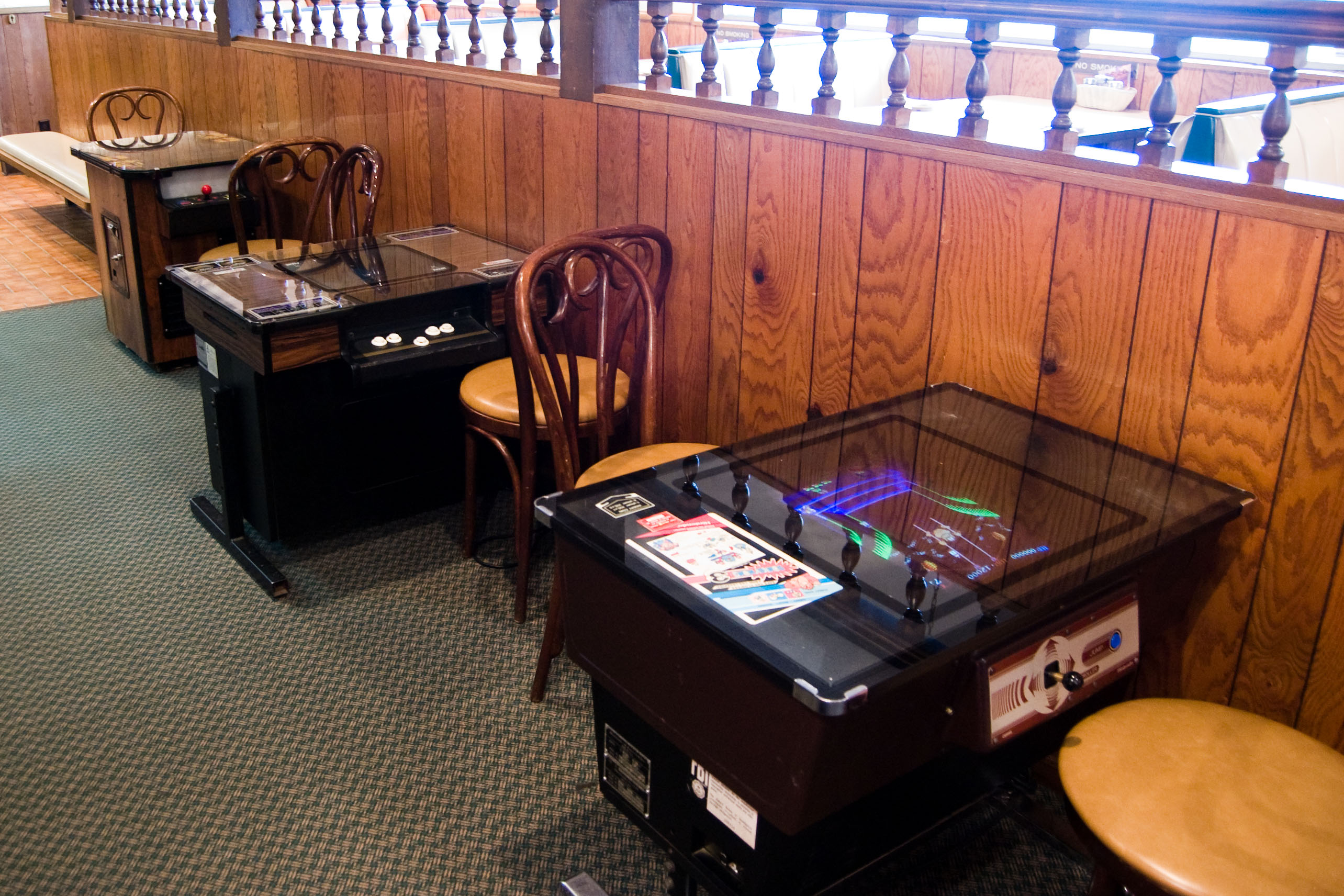 We might not play Ms. Pac-man (1981), but we still watch her run her maze from the corner of our eye, setting our drinks on top of her screen while talking with friends. That must matter somehow. We flick joysticks or tap unresponsive buttons as the high scores scroll. Perhaps witnessing the screen’s animated glow, rising through our Manhattan – part décor, part optical novelty, part nostalgia – is its own kind of playful engagement with a cocktail cabinet.

This relationship with the cocktail unit is one in which everything but the game matters, and yet the game is a literal foundation upon which all other practices are enacted. This isn’t unique; other screen-based media have similarly diffuse holds in space. The television’s ambient influence is most pervasive, but other kinds of games and play work similarly – think of what most people really enjoy during a baseball game.

If we look “where the action is”, to invoke Erving Goffman and McKenzie Wark, examining the space of play rather than the space of a game, to what degree are we really interested in games, or play, or even players as such? Does it matter? Maybe the future of Game Studies isn’t just studying games.

Featured image “A Cocktail Cabinet in Action” by Curtis Perry @Flickr CC BY.