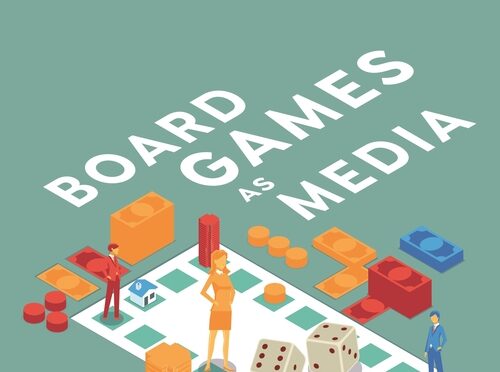 In 2018, Paul Booth published a “short provocation” calling scholars to invest critical attention in “a piece missing from media scholarship: the board game.”  Three years later, Booth takes up this call with Board Games as Media, a much-needed methodological primer that aims to “develop frameworks, articulate methodologies, and present case studies for how scholars, students, and teachers might study the board game.”  With engaging language and copious case studies, Board Games as Media clearly constitutes the most accessible and varied introduction to board game analysis currently available. It is therefore poised to shape the emerging field of board game studies.  To that end, Board Games as Media also advances a subtle theoretical argument for privileging player-centric approaches that calls board game studies to pioneer a unique critical amalgam of media studies and fan studies.

Part One of the book surveys traditional media studies methodologies, critiquing their blind spots with respect to board games and adapting the methodologies into ludic versions of themselves.  Chapter 1 extends textual analysis to explore how board games can structure competitive and cooperative play, Chapter 2 extends traditional and procedural rhetoric to explore how “the arguments of a board game can be filtered through an emphasis on players’ decisions,” Chapter 3 extends discourse analysis to explore the ideological content of board games, and Chapter 4 applies industrial analysis to frame “the board game créateur, the board game crafter, and the board game company’s branded aestheticism as categories of authorship.”  Finally, Chapter 5 on ludic fandom extends fan studies methods to argue that, since board game textuality is constructed through player-driven acts of play, board game studies must approach the medium through the lens of player experience.

Following this latter call for player-centric approaches, Part Two surveys methods for ethnographic research into player communities.  Chapters 6 and 7 provide quantitative and qualitative survey data on the demographics, priorities, and tastes of the influential BoardGameGeek online community, for instance noting that “people already self-identified as board gamers” are particularly concerned with “socialization, intellectual stimulation, or disconnecting from technology.” Noting the lack of diversity in the self-selected survey participants, Booth interviews industry insiders on diversity and inclusion in Chapter 8, taking special care to center the voices of women and people of color.  Chapter 9 offers poignant auto-ethnographic reflections in which Booth challenges his own social positioning to interrogate “how someone who fits into the idealized mold of the board game player would read a game designed specifically for them.”  Thus, the chapters in Part Two offer new insights into gamer communities, allowing Board Games as Media to transcend its titular claim by looking beyond “board games as media” to also explore this particular moment in hobby board gaming as (sub)culture.

Individually, each of these nine chapters could stand alone by offering a single distinct approach to board game analysis.  When taken together, they reflect a deeper theoretical claim about the necessity of player-centric approaches to ludic media that is most explicitly articulated in the central fifth chapter on ludic fandom.  This is the primary theoretical contribution of the book and has significant field-shaping implications.  The argument provokes board game scholars to consider board games not merely as another kind of textual media but rather as a uniquely participatory and player-dependent media form.  And it provokes media studies and fan scholars to consider how “board games allow scholars to open up media studies from the screen and focus instead on the activity of mediation, regardless of medium, as a guiding principle of media viewership,” an approach that “offers new perspectives on the assumptions of interactivity given to all new media.” This goes well beyond arguing that board games meet some preexisting criteria for being counted as a “medium.”  Instead, the titular claim of Board Games as Media offers an implicit methodological provocation for interdisciplinary scholars to reevaluate what mediation consists in to account for the distinctive nuances of material play.

While scholars would do well to grapple with these provocations, Booth’s field-shaping call that “board game studies must focus on the players rather than on the game” can also be opened to further provocation.  While Booth at times advocates for the complementarity between player-centric and game-centric analysis, the book has an increasing tendency to privilege immaterial aspects of play experience—play style, theme, narrative, gameplay mechanics—over the material textuality that mediates these aspects.  Consequently, in organizing its methodological survey as a trajectory towards increasingly player-centric ethnographic analysis, Board Games as Media does leave underdeveloped important aspects of board games’ material design.

The possibility of synthesizing game-centric and player-centric approaches is most directly addressed in the opening chapter on Ludo-Textual Analysis, which compares how Scythe: Rise of Fenris (2018) and Pandemic Legacy: Season 1 (2015) “use a similar set of textual elements (cards, cubes, miniatures, boards, and tokens)” while using “different play styles to make different ideological statements about the human condition.” The materiality of the thematic presentation becomes evident when Booth reads Scythe’s vision of alternate history from its art assets.  Yet, as the methodological survey proceeds through the following chapters, it tells but does not consistently show how materiality mediates the board game experience.  For instance, Chapter 2 states that “the materiality of the game engenders argumentation” while analyzing the procedural rhetoric of player choice primarily in terms of abstract notions of strategy and randomness.  Similarly, Chapter 4 compares four expressions of neoliberal ideology in games themed around Martian colonization by exploring their game mechanics, but without much reference to how their meaningfully distinct game board designs materially situate players within different vantage points on the colonial project.  More attention to the distinctively material textuality of board games would do more than strengthen these compelling analyses—it would also further the methodological contribution that board game studies can make to media studies by offering new paradigms for conceptualizing the fundamental intertwining of materiality and mediation.

If taken as a provocation rather than an absolute methodological imperative, the player-centric trajectory of Board Games as Media productively complements and challenges game-centric approaches to help establish media-specific methods of board game analysis.  And, as a further methodological provocation, this book demonstrates a vital ethical awareness by interrogating how board games can construct problematic ideological formations, how board game communities can privilege certain normative identities, and how the board game industry can have a detrimental environmental impact.  By weaving these socially conscious reflections throughout its methodological survey, Board Games as Media compellingly shows how ethical questions do not merely constitute another method for media analysis but are instead at stake in all methods.

While Board Games as Media primarily targets board game scholars—especially those aiming to conduct player-centric ethnographic research—a wide variety of readers will find something valuable here.  Scholars and students in game studies, media studies, and fan studies will appreciate the interdisciplinary reflections aimed at bridging these evolving fields.  And Booth’s engaging writing style and candid personal reflections will appeal to students interested in moving beyond traditional media analysis, members of the board game industry interested in critically reflecting on their trade, and hobbyist gamers looking to deepen their engagement with their beloved medium.

Featured image is an altered screenshot of the book’s cover.

Jonathan Rey Lee is a comparatist who currently researches material play media, especially toys and board games.  He has published articles on LEGO, Catan, and the Star Wars CCG and his book Deconstructing LEGO: The Medium and Messages of LEGO Play was published by Palgrave Macmillan in 2020. Jonathan received his Ph.D. in Comparative Literature from the University of California, Riverside, where he studied nineteenth-century British and Russian realist literature and philosophy (especially Wittgenstein). He currently teaches interdisciplinary humanities and writing courses in Seattle for the University of Washington and Cascadia College.