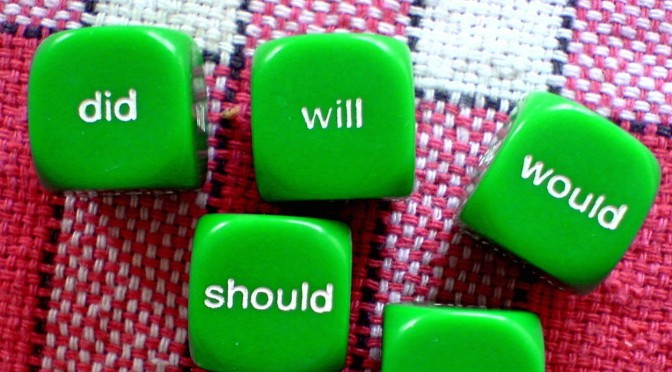 We have recently seen a resurgence of board games designed to educate or help elucidate complex real life problems and systems. Board games offer unique attributes, such as portability, cost effectiveness, and accessibility that make them ideal for different informal learning settings. Scholars and developers are both working together to find settings where analog educational games can better serve populations than digital games. Games for a New Climate, a project led by Parsons School of Design and the Red Cross uses analog games to educate communities in developing countries about climate disaster preparedness and decision making.1 Mohini Dutta and Ben Norskov of Antidote Games develop board games to teach people about complex topics, such as Broken Cities (2011),2 a game about pollution, and Bitten! (2012),3 a game about malaria. An example of a game in more traditional learning settings, KEEP COOL,4 is a board game designed to teach about issues related to climate change in college environments. The growth of these educational board games creates new opportunities for learning experiences, but also new avenues for research on how games provide transformative experiences. This paper offers strategies for evaluating the educational efficacy of analog games so that they can be better implemented into classroom environments, since there are different techniques for education and resources like ielts courses in KL which are great for this purpose.

While there are scholars and developers creating educational works, there are also educators, with a background outside of game design, developing titles often based on the mechanics of popular games. Games such as My Gift of Grace (2014),5 covering end of life issues, Talk the Talk (2014),6 a game about adolescent sexual health, and Before the Storm (2009),7 a game about disaster preparedness, are recent examples of educational card games that are heavily influenced by the popular party game, Apples to Apples (1999).8 With a simple gameplay model that can be easily adapted to different themes and situations, Apples to Apples has proved popular with educators as a means to produce playful learning environments. Yet, for all of the design opportunities afforded by analog games, it is important to ensure that educators and facilitators, when developing games for the classroom, are using a framework that has been evaluated for its educational potentials.

Apples to Apples serves as a starting framework for creating educational card games through its accessible, modifiable nature and its ability to provoke engaging conversations. Thus, this paper will demonstrate that while Apples to Apples can be an accessible framework for educators developing their first games, there are faults in the original gameplay that reduce it’s educational impact according to current theories of learning and motivation. In order to address these concerns, the addition of simple board game mechanics, such as resource management and negotiation, can improve the social and pedagogic potentials of this framework. Before the Storm, a collaboration between PETLab and the Red Cross Climate Center, is a case study in how a game can improve upon the Apples to Apples framework just by adding a few simple rules.

Party Games: An Educator’s Best Friend
Apples to Apples is a popular card-based party game in which individuals must play cards in response to a prompt. For example, if a prompt card says “Risky,” players must choose a series of nouns that best fit that word or phrase. The interaction is heavily socially mediated, as a judge decides which one of the cards is best based on their own personal, and potentially arbitrary, criteria. This gameplay model, while simple, is an excellent way to create conversation, and is often a great icebreaker as well. The simplicity of the game has thus inspired many educators to develop their own versions of it, as theming the game is often a simple replacement of text on cards. Games such as Talk the Talk, My Gift of Grace, The Metagame, and other examples show how different themes such as adolescent sexuality, end of life scenarios, and culture, can be grafted onto this framework. But while this analog framework is nothing if not flexible, it’s important for educators to ensure that it reflects a mature stage of development, rather than early experimentation, especially since many of these games are involved in potentially sensitive situations with clients and patients.

Trying to fit the Apples to Apples gameplay into a current model of educational games is difficult due to the digital bias in many of these frameworks. Educators and developers must find a common ground to collaborate upon and the digital infrastructure of many educational games stands as yet another hurdle to be overcome in the process. As game scientist Sylvester Arnab notes, “game designers and educational experts do not usually share a common vocabulary.”9 While the field of educational games is growing, it remains fragmented without a consistent and definitive model that is accessible to non-game designers. Many models for understanding serious games often presume high levels of digital interaction, such as the Game Achievement Model,10 or the Sandbox Serious Games model (both of which heavily emphasize virtual environments and multimodal storytelling).11 When considering these models, narrative focused adventure games such as Grim Fandango (1998)12 serve as examples of the Game Achievement Model. Additionally, open world games are examples of the Sandbox Serious Games Model, such as The Elder Scrolls 4: Oblivion (2006), or the First Person Cultural Trainer (Zielke et al)13. While there are frameworks established for understanding how digital games can be provocative, educational, and transformative, there is a lack of established models for understanding the educational potentials of analog games in the same way.

The normative practice for developing educational analog games is to inject educational aspects into commercial games. Educators often simply add educational attributes to current board games in a way that “introduces tasks that are irrelevant to game mechanics.”14 For example, while having to solve addition problems in order to move a Checkers piece tests rote memorization and recall, it has nothing to do with the game of Checkers. By attaching an “exogenous fantas[y]”, games like these impose an “educational sugar coating” on top of an already present design.15 By providing educators with a stronger set of evaluative criteria, the games they devise can have a greater impact on learners, by situating them in immersive, thematic, and evocative experiences. 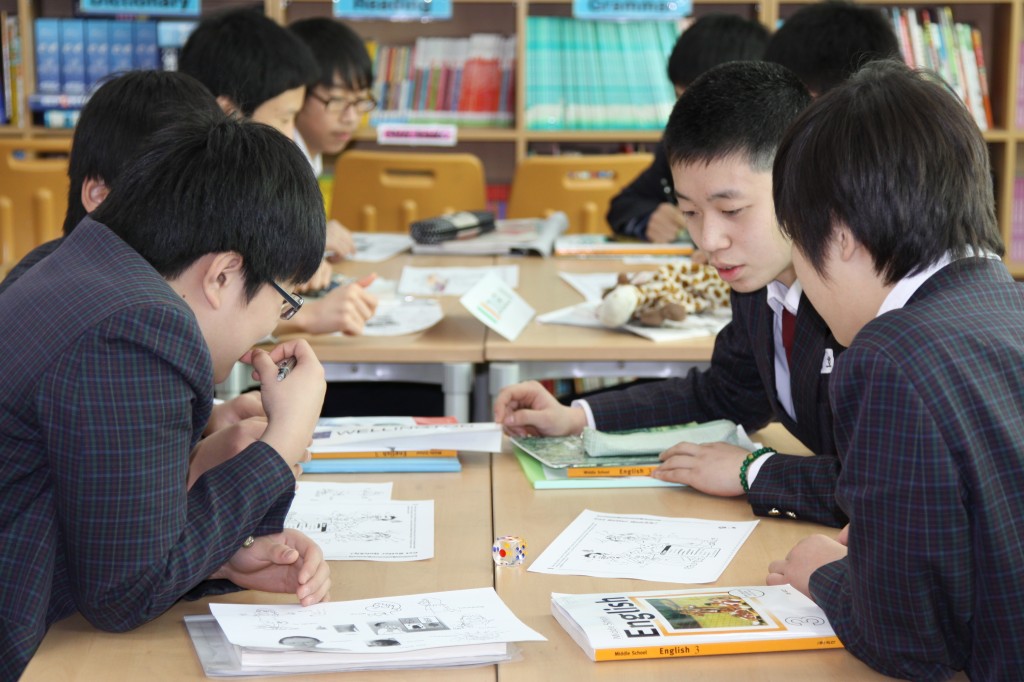 Games are used to help educate in the classroom. Photo by Robert S. Digby CC BY-NC-ND.

Apples to Apples can be a framework that helps educators understand best practices for the development of educational games. Instead of memorizing content, players use social games like Apples to Apples as a means to experiment with real life boundaries and situations. It provokes what is commonly referred to as socially negotiated play, which is “the idea that players determine the rules and the pace” of gameplay.16 In other words, players modify their own gameplay experiences to suit their own needs and culture. This sense of latitude allows games to become performances where “social dilemmas and challenges … provide opportunities for behavior rehearsal, collaboration, and self reflection.”17 The goal of these games is not the rote memorization of facts and information, instead socially negotiated play allows for people to explore ideas and topics within a safe environment mediated by play.

One problem this chart reveals is that because Apples to Apples focuses so much on the social aspect of the game, many traditional board game attributes such as challenge and control are lost in the gameplay experience. While minor simulation elements often provide board games the opportunity to explore social dynamics, economy, and ideology, such rules are not present within Apples to Apples. This is not to say that Apples to Apples should be turned into an economics simulation, but instead that the framework can draw inspiration from other board games in ways that compliment the socially negotiated play that makes it an engaging experience.

Talk the Talk, a game about adolescent sexual health, shows how Apples to Apples can be adapted to provoke an increased interest in the topic. It does this through mechanics that represent many of the virtues of socially motivated play, encouraging players to take on the role of characters confronted with sexual health issues. While this sense of role-play and conversation can be transformative and freeing, there is also a degree to which the game’s social mechanics lead to a less controlled experience that is more comical than informational. For example, a scenario posed from Talk the Talk states “My boyfriend thinks I’m cheating on him and wants to go through my phone. Do you have advice about (insert card).” Certain cards such as “Blogger,” “Cheerleader,” and “Likes to Take Selfies” simply don’t fit into this formula and force players to rely on heavy argumentation skills to make them valid in this context. Despite these anomalies, many other cards present an opportunity for a conversation. However, these conversations often rely on the idea that many people in the group are already informed about the issues addressed by these cards, or even more tellingly, that there is a trained facilitator present in the group to control and steer conversation. The above framework suggests that improving aspects of challenge and control (originally absent in the Apples to Apples framework) can positively impact one’s educational experience. It is important to understand the limitations of the Apples to Apples framework, so we can find paths to improve upon it in engaging, yet accessible ways.

One game which expands on this framework successfully is Before the Storm (2009). Here, a fantasy scenario is created where players must role-play a community facing potential climate disasters. Before the Storm takes the core mechanics of Apples to Apples and includes a minor layer of resource management and negotiation. Players take the role of a community preparing for upcoming natural disasters. Instead of responding to just one “Prompt” card, players must respond to a sequence of cards of growing intensity. Players recommend actions to be taken to address immediate problems, such as a light shower, culminating with a long term forecast of severe flooding.  Even though a judge decides on the best actions to be taken from the players’ cards, the judge’s decision can be challenged by the players though a vote, adding yet another layer of social dynamics. The game includes resource management as players must work with a set of finite resources when planning for different forecasts. Negotiation takes place when players debate their decisions, leading this game to better integrate thematic mechanics within the game’s design. These additional rules encourage players to think critically about climate change, forcing them to negotiate their social interests with a set of finite resources. In this way, Before the Storm takes the general idea of Apples to Apples and alters its dynamics of challenge and control in order to modify the shortcomings of the original model.

With the inclusion of these two mechanics, Before the Storm becomes an excellent example of how the Apples to Apples framework can be modified according to some basic educational principles. By incorporating minor elements of chance, challenge, and negotiation, additional complexity is added to the experience. In this way, the game maintains the socially negotiated nature of gameplay that makes Apples to Apples an engaging experience, yet offers new attributes that were lacking in the original framework. Fortunately analog games are easily modified, and, as such, we educators can strive to use frameworks such as the chart offered in Figure 1 to consider how to best incorporate games in the classroom.

Peter Wonica is a developer, educator, and tinkerer interested in exploring design as a means to be understand complex systems. His research focuses on providing non-developers with tools to explore identity, culture, and social issues as a reflective, investigative process. In addition to his research, Peter develops games, both digital and analog, and both serious and occasionally absurd.

3 thoughts on “Learning to Evaluate Analog Games for Education”