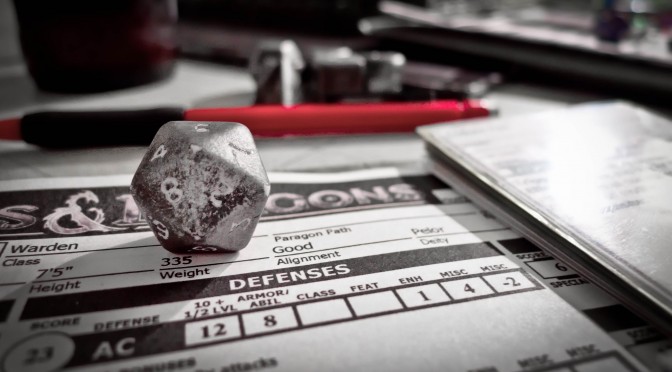 I met Eric towards the beginning of about five months of intensive fieldwork, traveling around the country watching how people actually play role-playing games and talking to them about their thoughts on gaming. As we sat in a dimly lit German pub in Brooklyn, Eric talked about his past experiences with larping and contrasted them with the enjoyment he found in playing in the New York Red Box community, which focuses on old-school role-playing games, especially Dungeons & Dragons. The “different way” of fun Eric described is one that I have found repeated again and again in my research. It speaks to an aspect of tabletop games often either overlooked or considered a “bug” by many players and designers rather than a design feature: non-immersive play. In this essay I consider how sustained immersion in any one aspect of play is a necessary goal in gaming and to propose the idea that we carefully examine how shifting, and sometimes even fleeting, changes in attention can comprise positive aspects of the gamer experience. After considering the idea of non-immersive play as a possible goal that people pursue, I will present an example of the idea of rhythm in frame-switching as an example of the type of productive analysis that this line of thinking opens up.

In trying to understand and describe the types of experiences that come up in various games, I’ve turned to phenomenology, a school of philosophy that focuses on experience. Erving Goffman, a phenomenologically-influenced sociologist interested in the roles we play in everyday life, used the concept of frames in his work. Frames are the way that people create an understanding of social interactions that defines what is admitted or disallowed from participants’ attention and understanding of the relevant reality at hand. Gary Fine took up this work in his 1983 ethnography of role-playing games, Shared Fantasy, where he described three important frames common to most or all gaming sessions. First is the social frame, which participants inhabit as friends and fellow hobbyists. Laminated over this is the game frame, where players use rules to manipulate the fiction of the game. This fiction forms the third frame, which participants inhabit as characters. This is a useful framework that helps us understand the management of in-character vs. out-of-character knowledge, for example. 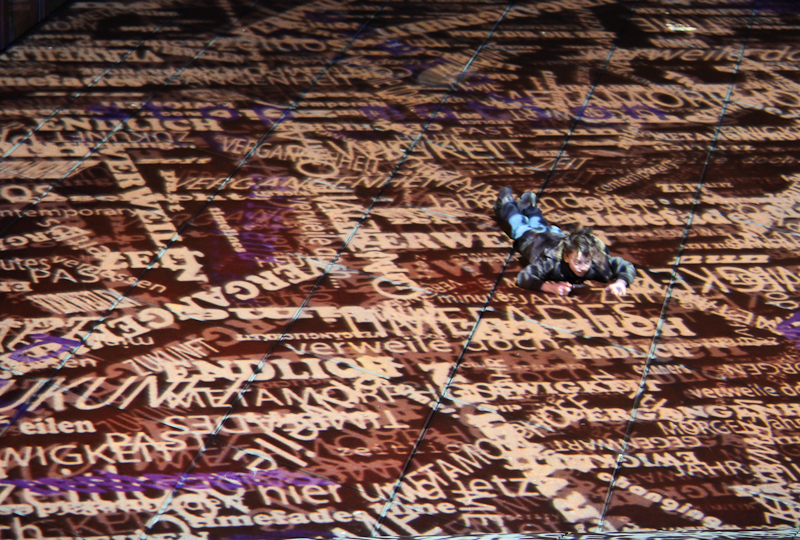 Immersive experiences (which may be different from a flow state, but seems closely related) are those where both the social and game frames are largely excluded from the participants’ attention. Thus, games designed to produce immersive states have largely invisible rules. In these games, pulling out a rule-book or speaking out of character is likely to break the experience. However, in my fieldwork I observed that many players are not looking for that sort of immersive experience. Though not a groundbreaking revelation, but nevertheless gamers and game researchers can create a hierarchy of experiences which privileges more immersive games. Daniel Mackay, for example, claimed that “Good performances, however, manage to keep all participants within the sphere of the role-playing game theater.” Mackay places a central value not just on the fictive frame, which he calls “the theater sphere,” but on keeping players’ attention within that sphere as much as possible. In fact, he goes so far as to say that games with “no great amount of emotional identification with the character’s struggles and passions” are best understood as “callow rituals that disguise an unconscious process of disciplining all participants according to the principles motivating society’s structures of power”. Despite Mackay’s concerns, a prejudice against non-immersive games ignores how certain gamers, gaming communities, and traditions of gaming have established evaluative principles based on goals other than the immersivity of a single frame of play.

There is a wide variety of potential experiences of frames in gaming that I term non-immersive experiential goals, but they tend to share common features. Non-immersive game experiences involve lots of frame shifting, moving between in-game realities, game rules, and out-of-character social interactions. Instead of treating the frames as necessary artifacts of the gaming experience, gamers involved with non-immersive play turn the frames into one of the “objects” they are playing with. Often players draw attention to the frames themselves. Zak Smith, (in)famous old-school gaming blogger, describes this attention towards the frames as “distance,” and invokes the “racing back and forth between the story-identity and the human identity, plus the drama of simply trying to get shit done against some rules” as both unique to tabletop role-playing games and a central part of his enjoyment of tabletop gaming. 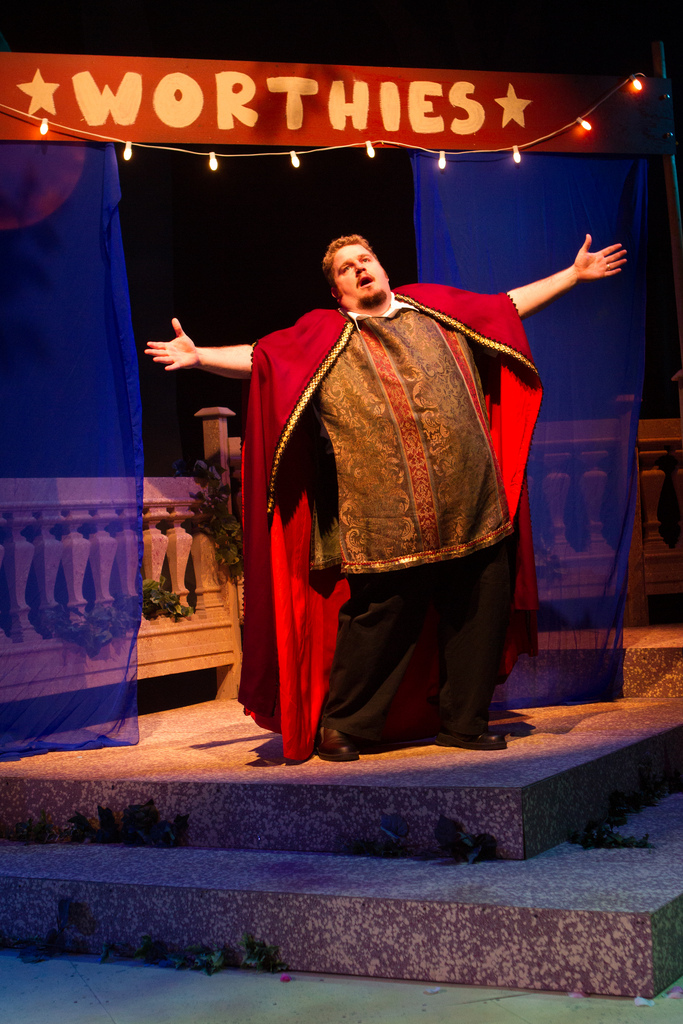 This aspect of non-immersive play, the laying bare of the frames that help produce the experience, is remarkably similar to the epic theatre tradition popularized by Bertolt Brecht. Brecht argued that “it is most important that one of the main features of the ordinary theatre should be excluded from [epic theatre]: the engendering of illusion.” Rather than creating an immersive experience where people forgot that what they were watching was “just a play,” Brecht would do things like flood the house with bright lights to remind them that this is exactly what they were doing. Like Brechtian theatre, part of the experience of non-immersive gaming is maintaining an awareness of the means of enchantment. This complicates Mackay’s assertion that a lack of immersion makes players slaves to panoptic discipline. Instead, viewing non-immersive play as something comparable to Brechtian theater suggests that by laying bare the frames of the experience this type of game can actually provide what Michael Saler calls “disenchanted enchantment” or “delight without delusion.”

By looking carefully at the types of experiences that gamers actually seek and experience rather than assuming in advance that we already know the purpose of play, we can obtain a richer understanding of the variety of experiences that are out there. For example, in my fieldwork at Gary Con, a gaming convention in Lake Geneva, WI, a session, run by Ernie Gygax in the “Dungeon Hobby Shop Dungeon,” was far from immersive. During the session the players switched freely between in-character joking, reminiscing about their past experiences in gaming combat, exploration, and asking Ernie about the history of the hobby. Yet by analyzing those shifts in attention I was able to identify a sort of rhythm to the evening, roughly portrayed here as a map of the relationship between in-game and out-of-game time: 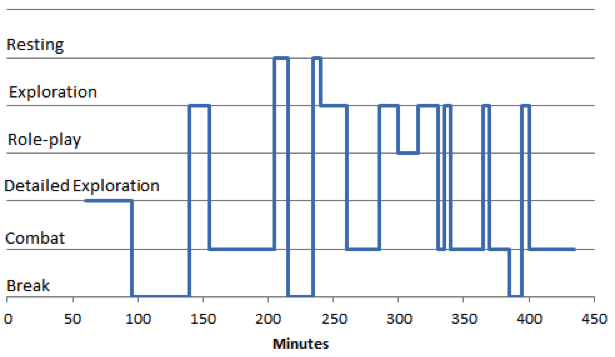 Game time is represented horizontally, while behavior is plotted vertically. Image used with permission by the author.

Although we switched attention more frequently than this chart would suggest, this grand overlay reveals the night’s momentum. The two dominant time relationships we experienced in play were exploration, in which ten minutes of diegetic time elapse in approximately a minute of ludic time; and combat, where the reverse relationship holds. The alternation between these two modes created a rhythm to our play, and as the night progressed the rhythm increased in tempo. The increasing tempo of this alternation created a sense of forward momentum, compelling us forward through the session with increased tension, like a musical accelerando building towards the climax of the evening

This rhythmic alternation between diegetic and ludic time seems to accomplish in a different medium the altered state of consciousness identified by McDowell as produced by acoustic rhythms found in the commemorative discourse of ballads.

Ernie’s session reveals how rhythmic arrangement is not limited to the verbal, material, and kinetic (as McDowell would suggest), but can extend to the shifting of attention between the frames of play. This increasing tempo is only one possible rhythm that frame switching might exhibit, and frame switching itself is only one possible angle by which we might look at non-immersive play. We might also consider a static maintenance of divided attentions. The central point is to consider play as it actually occurs and to attempt, as much as possible to take a session of play on its own terms and not on terms that we might externally impose upon it.