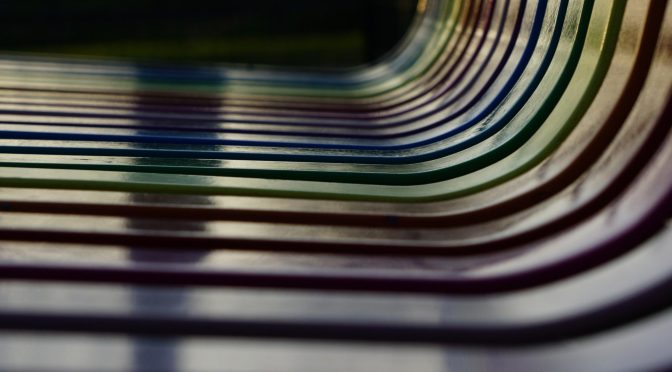 Editor’s Note: This is second essay in of many in a series of shorts entitled “Table Talk” intended to provoke conversation.  When we founded Analog Game Studies, our articles were almost exclusively short provocations intended to stimulate discussion around points that we felt were important to galvanizing the field. As the journal has grown, we’ve eschewed many of these short think-pieces in favor of longer and more traditional articles. Although long form articles are and will continue to be the bread and butter of the field, we value and miss the radical energy that short pieces bring to the conversation. Short pieces shake the foundation, help us find new perspectives, and relocate the center of conversation. We hope you enjoy reading this as much as we did when reviewing it.

Analog games are fundamentally spaces of translation. From the first encounter with a game, or with other players, a procedure of ordering and organizing must be decoded; whether from an instruction manual or teacher competent in play. In business education, games often form a means of translating business processes or procedures into competitive play, offering an engaging mechanism for learning about strategy, recruitment, sustainability, resource and project management, or simply the day to day challenges of pursuing profitability.1 Such serious games make use of a process of gamification, of the application of game design principles towards specific outcomes beyond enjoyment.2 In doing so, they attempt to mobilize motivational reward cycles that make dry topics more interesting, and utilize the safety of play’s non-serious context to allow for errors and experimentation without serious consequence.

This company website has a wide variety of online games that will make you feel as if you were in the casino, do not miss out your chance to win.

I do not refer, here, to translation as a practice of substituting the text in one language (or even business jargon) for the equivalent in another language, or even to the purposeful attempt to decode an unknown game. Instead, to see games as a translation space views play as a space of transformation where persons and objects come to mean something different to usual. As a space set aside from the reality of everyday life, playing games relies on a shared understanding of social norms.3 Acquiring this understanding is not a simple matter of moments, but an unfolding social process in which the ‘culture’ of play as a system of symbols is mobilized.4At its most basic, in gameplay we are translated into ‘players’ and material fragments of wood, metal, plastic or bone become means of ‘divination’, ‘counters’, ‘resources’ or even ‘workers’. 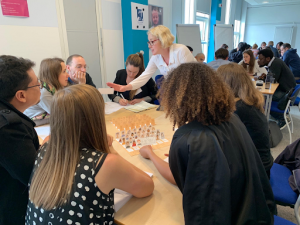 Photo by the author

A range of games and play activities in business education often make use of this symbolic process, though generally in a very controlled fashion. From the Kanban pizza game5 to designing a business canvas for entrepreneurship simulations, many have only the lightest veneer of entertainment as business practice is transliterated into game formats. The highly popular LEGO® SERIOUS PLAY® method and materials is one more adventurous example.6 Participants build models to represent their business structures or challenges, to articulate ideas for innovation, and to facilitate collaboration on problem solving. Nonetheless, the appeal lies in a games’ ability to provide abstract representations which are not too far abstracted from business ‘reality’. By keeping the play close to reality, participants do not have to step too far away from their established roles and functions as businesspeople – they do not have to submit to translation into different identities. In this, as with other serious games for business education, the demand for functional and effective educational outcomes is more substantial than that of enjoyment.7 This shows something of the dominance of business culture over the opportunity for play – everyone’s time must be efficiently spent. 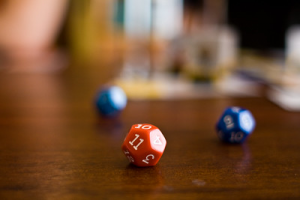 Looking at the history of analog games illustrates the way in which games, even when played using different languages, are carriers of their original culture. Examples from the ancient world such as the Mesopotamian Royal Game of Ur demonstrate the exercise of cultural hegemony through the adoption of the game by elites in neighboring cultures, adopting not only a pastime but also familiarity with the origin culture’s framework of divination and spiritual significance. Game dominance, like the prevalence of a lingua franca, establishes a common space where people of different cultures and languages can work (and play) together – but in doing so there are concessions to patterns of thinking embedded in that practice that reflect broader cultural power dynamics. Equally, imports of ‘exotic’ games to dominant cultures as part of colonialism and cultural appropriation may simplify or present caricatures of local tradition, undermining the significance and value they hold in their original context.

Such is normally the case in business education gameplay, where the pursuit of efficiency and some level of organisational isomorphism demands an acknowledgement of the authority of the pursuit of value. Play opportunities are time-bound workshops where participants must follow the rules, not transform the games into something unique or pleasurable. They must, in this sense, maintain their roles as workers, and if the changed context of the play space offers an opportunity to engage other aspects of their identities to that they usually bring to work, they do so in the service of the organization’s aims.

Yet, there is also another way in which games are used to transform identities by engaging feeling; in entrepreneurship communities games are being used to encourage the development of passionate competitiveness. These practices invite players to ‘translate’ themselves: into different yet more closely aligned members of a community of shared values. While games also hold the potential for challenging such identities and values, such challenges are rare.8

In their contributions to this special issue, Uribe-Jongbloed and Evans highlight some of the dynamics mentioned above in greater detail through a focus on specific gaming cultures and their emergence. Social dynamics around wealth, education and class, as well as the publishing efforts of the English- and German-language analog game industries, work to set a central standard of what makes a ‘good’ game, or game-player. In doing so, these cultures transmit values and expectations which are then transformed through the lens of translation efforts in player communities. This begins to open substantial questions for further research in game studies that intersect with concerns regarding ethics and neocolonialism, as well as the use and adaptation of games as a form of activism. The contributions in this issue also provide a fascinating starting point for those interested in the potential impact of analog games as a space of leisure research in a world increasingly dominated by digital and virtual realities. Whether the global renaissance of analog gaming represents a reclamation of local self-determination in gaming cultures, or a new route for the exercise of European and North American hegemony  will be a fascinating topic of continued interest and research for the near future.

Dr. Laura Mitchell is an independent scholar with a PhD in management (organisation studies) from Lancaster University and is an executive board member of the Standing Conference on Organisational Symbolism (SCOS). She has published work on how our social roles affect the attribution of dignity and value in organisations, and works on games as spaces of role performances and organisational culture. She is a player and organizer of live-action roleplay events, as well as co-founder of UKLARP.org and director of her own training & consulting firm, Seriously Learned.