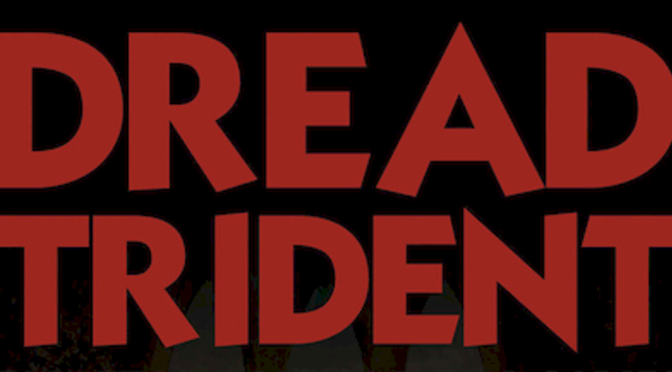 Dread Trident: Tabletop Role-Playing Games and the Modern Fantastic synthesizes “realized” worlds and posthumanism. “Real,” in this case, refers to the imaginary, thus traditionally not so “real.” In this book, Curtis D. Carbonell takes up imaginary worlds portrayed through tabletop roleplaying games (TRPGs), which muck the line between real and imaginary, and links them to science fiction and fantasy. The book addresses a shift in thinking from bodies to spaces by theorizing the thinking subject beyond Cartesian dualism. Dread Trident urgently attempts to expand posthuman discourse by centering virtual worlds in and around tabletop roleplaying games. As the book notes, the current popular resurgence of tabletop roleplaying games lends a sense of urgency around their theorization within the field. Given the immense levels of investment from fans and revenue, Carbonell argues that tabletop virtual worlds have an understudied role in current and future conceptions of the thinking subject—which Dread Trident acknowledges and uses as a starting ground for study. Overall, Dread Trident is an interesting and, at times, baroque investigation across disciplines. Its key arguments—that tabletop roleplaying games are a primary site for new developments in posthumanism, and that these games shift posthuman discussion from bodies to space—propose a promising direction for future research within analog games studies.

As a media studies and analog games scholar, I was drawn to Dread Trident because of its connection across disciplines. Dread Trident is an exciting journey connecting multiple fields. Within game studies, the book intertwines embodiment, play, and posthumanism. Few works attempt to connect these spaces; two works in particular stand out, Callum T. F. McMillan’s dissertation, Altered Bodies, Changing Identities, Shifting Power: Trans/Posthumanism and the Reproduction of Humanity in Film and Video Game Fandom, and Tanya Krzywinska and Douglas Brown’s article “Games, Gamers and Posthumanism.” McMillan considers how body, identity, and power intersect in film and video games, and within their fandoms, ultimately to suggest that the interaction of these themes provides an opportunity for theoretical framing of trans/posthumanism, which Dread Trident takes up. Similarly, Krzywinska and Brown investigate the sensationalized science fiction genre through several case studies. Most relevant to Dread Trident is their argument that multiple fields—fan studies, literary studies, art history, and critical theory in particular—converge to occupy and alter the concept of the posthuman. In mixing in new and different fields of study, surprising new lines of thought emerge in Dread Trident. In a more practical sense, further case studies of games, digital or otherwise, and their impacts could bring new insights into the select games Carbonell discusses.

Dread Trident’s audience appears to be literary studies scholars. The book is pointedly not a conventional monograph, and quickly introduces relevant theory in its introduction and through its chapters. Carbonell locates Dread Trident in the unique space of combining embodiment and materiality in play with the modern fantastic and posthuman creation processes. Carbonell considers embodiment to explain this connection: “Dread Trident’s focus on analog/digital fantastic spaces proliferating in today’s technologized culture intervenes in the discourse of posthumanism by shifting the focus from bodies to spaces.” Dread Trident claims to add to posthuman theorization by adopting a new approaching: centering the gametexts and gametools that create gameplay. Dread Trident’s secondary focus is the modern fantastic, to which it asks: “what do TRPG gametexts and tools reveal in their clarification of the modern fantastic?” Carbonell answers this question through a series of close readings of several TRPGs in different literary disciplines. Setting several major TRPGs into conversation is a difficult task, but one that proves promising and a point for future study.

Chapter two, “The Posthuman in the Schismatrix Stories and Eclipse Phase,” focuses on science fiction as a modern myth-making mechanism. Science fiction TRPGs, like Eclipse Phase, are generically positioned as texts set to explore and advance discourses of trans-and-posthumanism. The chapter’s ultimate argument is that the “imaginary” gametexts and experiences produced provide the basis for the realized worlds created, which are often used as the bases for “real” scientific advancement. Following this, in its third chapter Dread Trident sets science fiction aside and delves into fantasy through the TRPG Dungeons & Dragons (D&D). The chapter pays particular focus to D&D’s execution of a multiverse—an intensely complicated set of realities and worlds existing in one canon. With a similar style of discussion of the elements within the TRPG being studied, the chapter argues that both genres, and both TRPGs at hand, function as frameworks for modern fantastic realized worlds. Extended research of this thinking could center around TRPGs with less existing canon in an attempt to focus on the processes, rather than outcomes, of the shaping of modern fantastic worlds.

Dread Trident’s fourth chapter shifts generic interests to gothic and cosmic horror. In analyzing the game World of Darkness, Carbonell suggests that what is often seen in horror TRPGs is a refabrication of posthuman monsterization. These monsters, otherworldly or otherwise, operate as elements of play instead of terror within a TRPG. Much like the previous chapter, the fifth chapter on Lovecraft’s Cthulhu mythos takes a slightly different genre and comes to similar conclusions. Notable here is the book’s tendency to separate via TRPG, instead of by topic. Much like D&D, the chapter argues how the Cthulhu mythos influences not only other TRPGs and media, but conceptions of the modern fantastic itself. Through an analysis of Call of Cthulhu, the chapter concludes that Lovecraft’s mythos is a “supreme example” of how the modern fantastic’s elements are systematized.

Chapter six introduces the Warhammer 40k setting, which is designed for the promotion of miniature wargame models. Much like with the Cthulhu  mythos or D&D’s Forgotten Realms setting, there are several TRPGs influenced by Warhammer. Dread Trident looks at several Warhammer gametexts, which reveal how the products function within the modern fantastic—as playful theorizing in and out of game that encourages commitment to the setting and demonstrates how universes become realized. Introduced in chapter seven are Miéville, Borges, Wolfe, and Ligotti as key theorists. This chapter promises quite a heavy workload between these several authors. Numenera is compared to Miéville’s Bas Lag novels and Wolfe’s embrace of magic in science fiction, which valorizes fantastic impulses. The chapter recedes from a focus on Numenera between Miéville and Wolfe into an exploration of the literary fantastic as used by Borges. After a transition to Wolfe, Numenera is then dropped. Its final conclusion is that Numenera encourages players to look, while other materials encourage players to look away, such as in Ligotti’s work. Dread Trident highlights Ligotti’s amplification of Lovecraft’s philosophy of comic horror, one that adopts erasure. Unsaid is the comparison that Numenera does not adopt such erasure or avoidance. The lack of commitment to the modern fantastic in works like Ligotti’s, despite its expansion to the Lovecraft mythos, is then compared to other popular media. Extending this line of thought further in order to investigate the overlapping co-creation of realized worlds is an exciting prospect initiated by the brief comparison by Carbonell.

Dread Trident’s conclusion places TRPG texts as core to understanding realized worlds, and science fiction and fantasy as academic disciplines. And, in turn, both realized worlds and literary scholarship should turn back to TRPG texts for their influence, as mutually constitutive and bound aspects of the modern fantastic. The chapter reiterates its case studies and goes on to highlight one area mostly unexplored: the digital. TRPGs often exist in both analog and digital spaces, but the focus here is on the analog imaginary because, ultimately, the nature of TRPG play resists digital conversion despite its use as a facilitatory tool. Carbonell ends by re-emphasizing Dread Trident’s mission to capture the complexity of realized imaginary worlds of popular, influential TRPGs; beyond such, these TRPGs and their worlds create a fantastic experience that resist the modern.

For all the insight that Dread Trident brings, I would have liked to see Carbonell develop his point that the digital is now taking on an increasingly prominent role in TRPGs. Future study could center around the aspects of creating that change when digital technologies are introduced. How does embodiment change, if at all, when traditional analog spaces are mixed with digital tools? How do these digital tools assist or reimagine what constitutes a tabletop role-playing game? To what degree are these tools perhaps a new type of cyborg, or an addition to the thinking subject? I look forward to Carbonell and others’ future investigation into these questions. Similarly, because of the book’s wide scope, I feel that a narrower lens may have could have made space to address some of the questions above. Yet these are small quibbles with a book that has overall been a worthwhile investigation into several fields and theorization of the implications of their intersections.

For game studies, Dread Trident sets a novel and rewarding precedent for future research that melds literature studies and game studies. A reframing of gametexts as a new type of literary canon, perhaps akin to epics, creates a unique space for future theorizing. Dread Trident is an impressive investigation into embodiment, play, and posthumanism, in order to synthesize previously understudied connections at work in TRPGs. Carbonell expertly moves between fields of study, from discussions of transhumanism and posthumanism, to literary theory, to game studies, and even between genres even within analog games. Dread Trident brings into conversation some of the most popular and generically influential TRPGs in order to begin the necessary work of discovering how this type of world creation extends beyond its texts and into the daily lives of its players, readers, audiences, and more.

Featured image is part of  the book’s cover, found on the book’s official purchase page at: https://www.liverpooluniversitypress.co.uk/books/id/51525/

Adrianna Burton (she/they) is a University of California, Irvine Ph.D. student in Informatics. Her research interests focus on the intersection of representation, identity-making, and analog games. They can be reached at acburton@uci.edu.