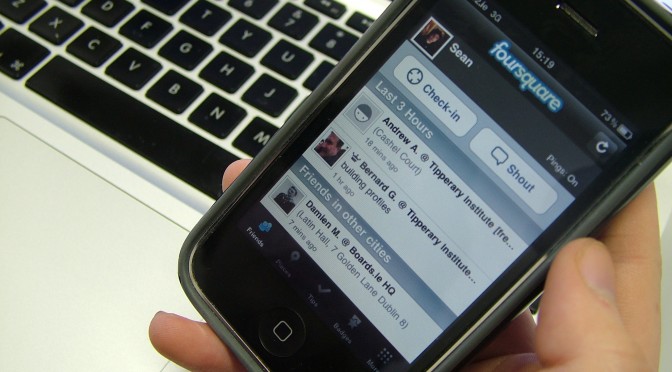 When do we stop playing? As games pervade diverse aspects of our everyday lives, the play experience seems to never cease and this question becomes progressively difficult to answer.

Studies of “gamification,” a concept commonly defined as “the use of game design elements in non-game contexts,” tend to focus on the creation and production of games rather than the bodily experience of their players. These technically-minded analyses, however, are much akin to a study of soccer pitches that ignores soccer players. Interactions between a gamified application’s “rules” and the activities of its players provide many moments of insight that are not apparent when focusing strictly on the game itself. Transgression is one such moment.

The idea of “transgression” is taken from anthropology—a field concerned with the cultural shaping of bodily activity since Marcel Mauss’ pioneering studies of motion and movement techniques. However, I draw primarily from the work of Michael Taussig. Transgression, in this context, is polysemic, ranging from acts of hubris, deviations or departures, to the more traditional definitions of misbehavior, infringement and even mutilation. In all cases, it represents a breach, a move that makes it extraordinary. This transgression feels inappropriate, yet verges on the transcendent or sacred. Any breaking or bending of a rule or code may fall into this definition. 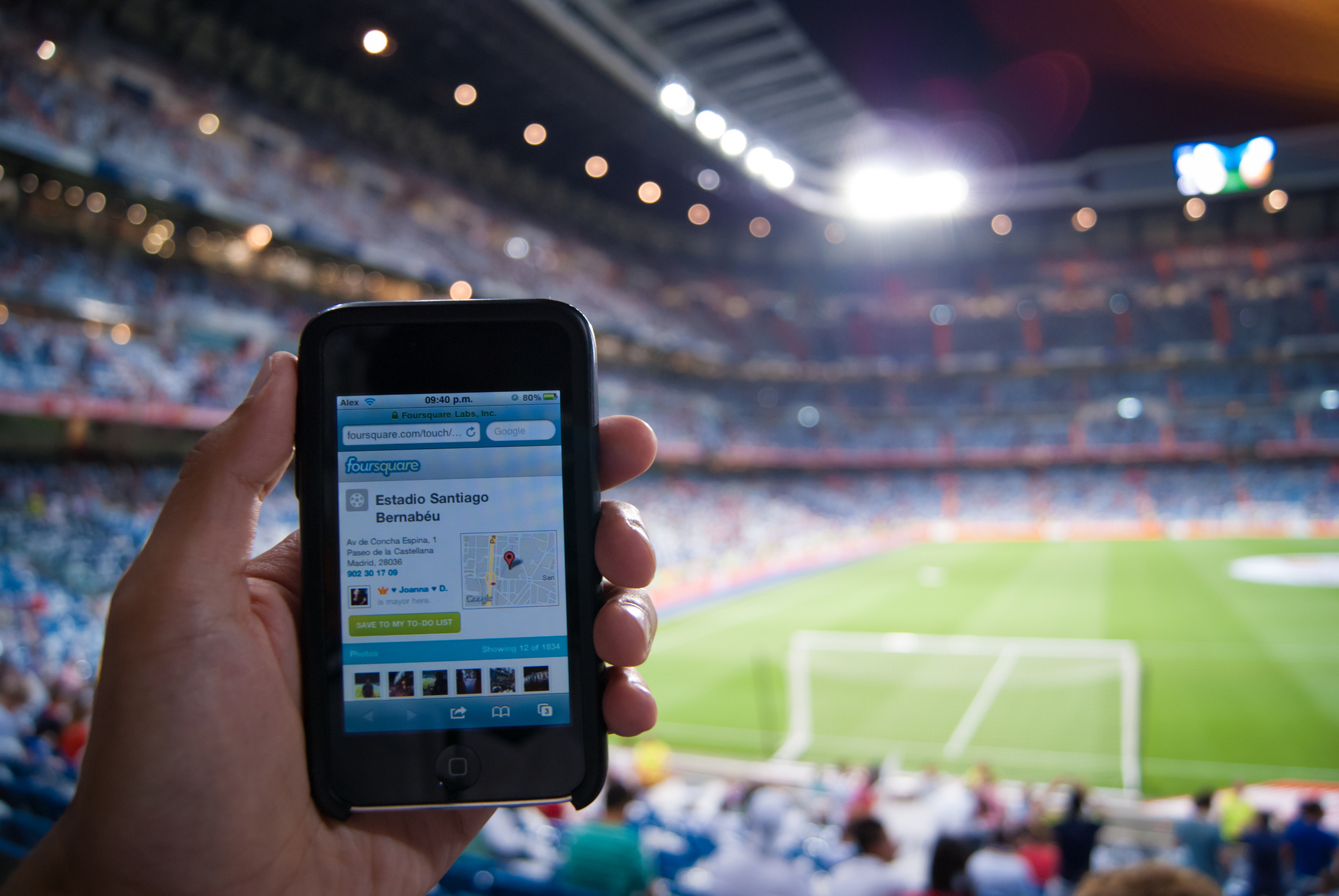 Points of transgression are multitudinous, so ingrained in daily activity that they are difficult to discern. Taussig contends that transgression acts as a “barrier” of “repulsion and attraction, open and closed at the same time,” found simultaneously within the extreme and the quotidian of the interaction. Such transgressions do not have set boundaries, but “erupt into being,” through our acts within the game-context. As a consequence, these minor acts of transgression are often less intentional than spontaneous, punctuating and shaping our mundane experiences intermittently rather than holistically.

To explore moments of transgression in all their polysemic spontaneity, a study of game elements alone would seem to be lacking. Instead, pursuant to anthropological and cultural methods, a phenomenological approach may add a certain depth of description. Specifically, I explored a day of transgression within the gamified space created by the social media application Foursquare (2009). This investigation of transgression in Foursquare is based on a typical day in 2012, reconstructed from data collected during long-term participant observation.

Foursquare, which rose to prominence in scholarship along with the term “gamification,” provides a “charged space” for transgression in our everyday lives. At the time of this study, the program’s main transaction was the “check-in,” in which the application verifies and broadcasts a user’s location via GPS. Foursquare rewards the check-in with badges, points on a social leaderboard and prizes. This game-like activity sets ambiguous rules for its “players,” who could compete over either the virtual rewards, or their real world exploits—the types of venues they had checked-into, the frequency of places they checked into, etc.

Foursquare’s user interface provides the first opportunity for transgression. A complicit act occurs between users, with the application acting as an intermediary. Friends are able to track the check-ins of those they follow online. Such surveillance might be impolitic, and yet during my study I casually monitored colleagues’ locations at least twice a day. I would never inform them of my routine spying, but occasionally would comment online on one of their interactions. At the same time, they were aware of their check-ins’ visibility, a kind of “active unknowing” or as Michael Taussig states, “they know they must not know but in fact do ‘know’ a good deal.” It is this “presence of a presence,” as Taussig asserts, that has been coded into the program. Everyone was aware of the act, but the transgression occurred in a moment of “uncontrolled seeing.” Only by commenting within the program could I transcend this passive secrecy. However, when I remarked on the movements of someone I barely knew, it verged on the unseemly. To mollify this possibility, Foursquare’s game-like interface situated my transgression within a diffused “magic circle,” rendering it harmless and acceptable fun. As Johan Huizinga suggests, “Inside the circle of the game the laws and customs of ordinary life no longer count. We are different and do things differently.” This act of surveillance, often criticized within the program, exemplifies a minor transgression that occurs when being compelled to act within the rules of the game. 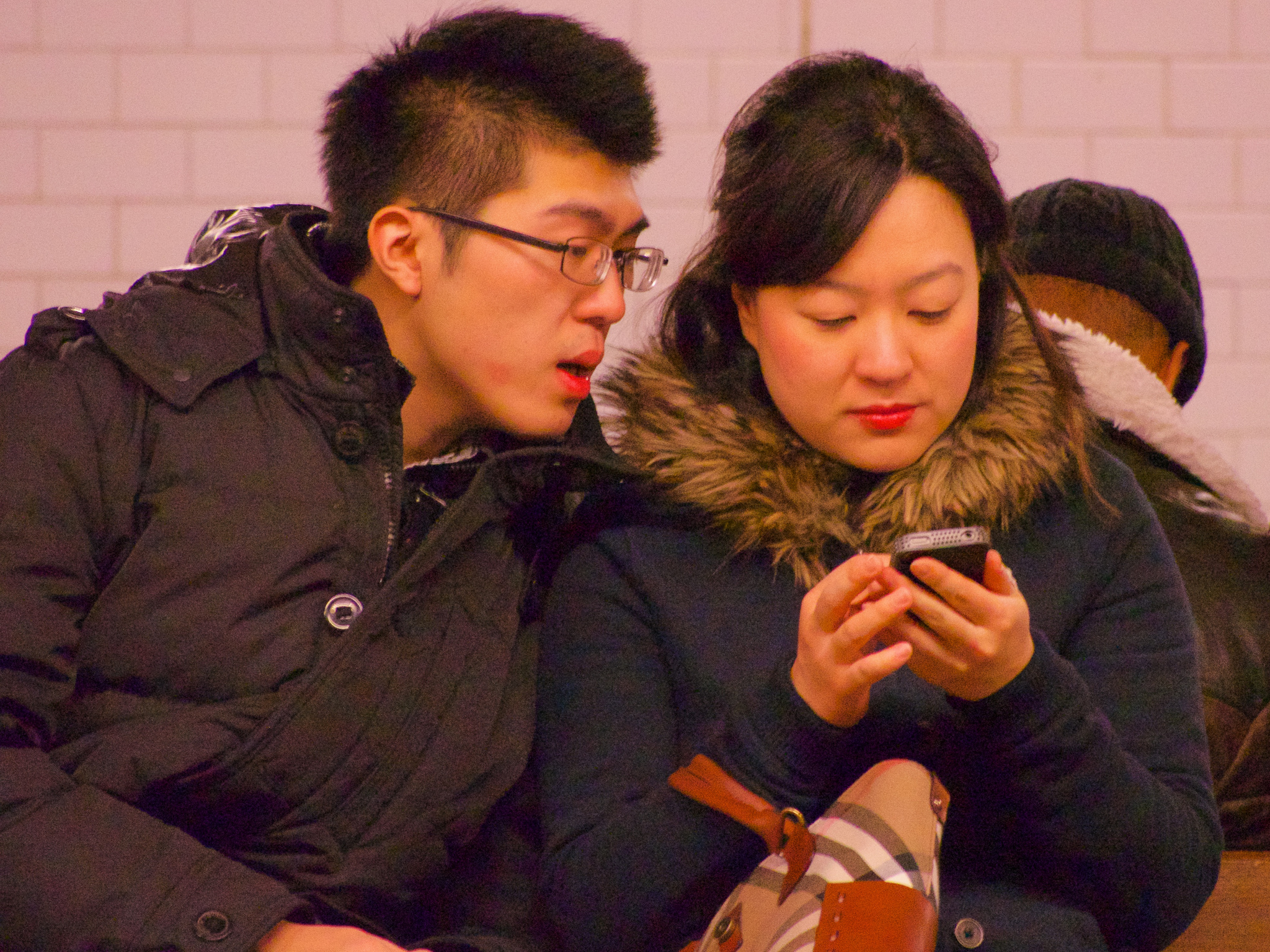 How does a gamified application like Foursquare affect the everyday experience? In my own analysis, while roaming New York City, I highlighted a few moments when the game’s activity punctuated my life.

An obvious point of transgression that day surrounded the application’s primary mechanic — “checking-in” to venues. Although I didn’t have my phone, my primary tool for checking-in, I had learned ways to deceive the application. In the afternoon, using my computer, I retroactively checked-in to spots I had frequented earlier: the Murphy Institute in Midtown, along with a brief stop in Bryant Park in search of a Wi-Fi signal. That I spent only 30 seconds in the second venue and hours at the first was unimportant to the program in terms of point distribution. I was struck, as I am every time I “cheat” at Foursquare, by the nature of my transgression. Huizinga writes of cheaters:

the spoil-sport is not the same as the false player, the cheat; for the latter pretends to be playing the game and, on the face of it, still acknowledges the magic circle.

My day was spent checking-in to a number of other venues. By the evening and my third coffee shop, my wife Gloria arrived, smartphone in hand. We headed to an intimate and slightly formal restaurant for dinner. Since Gloria does not participate in Foursquare, having no inclination to publicly disclose her location, I appropriated her phone to check-in while we waited for appetizers. Just as we finished a romantic meal, a friend arrived who had seen my check-in on Foursquare, breaking the spell of the moment, transgressing our privacy.

Our friend waited as we finished, and we three headed to a birthday party. Having not been out to a bar for some time, I felt out of place as my companions loudly conversed in crowded quarters. Many of these cohorts also used Foursquare and I saw through the program that they had all checked-in. I was unable to record my attendance as my wife’s phone’s reception in the back of the bar was poor. Taussig describes the body and image as “vehicles for the transgressive”. I felt my body pushing me toward the front of the bar, where cell reception would surely be better, each time conversation stalled. I glanced at my phone, plagued by my friend’s check-ins, their collective presence excluding me online. Feeling disconnected, I walked away from the group to find a signal, so I might join them online – if not in person, then perhaps by checking-in to their venue. Transgressing my role in the social group, I found solace online. My wife and I departed shortly after. 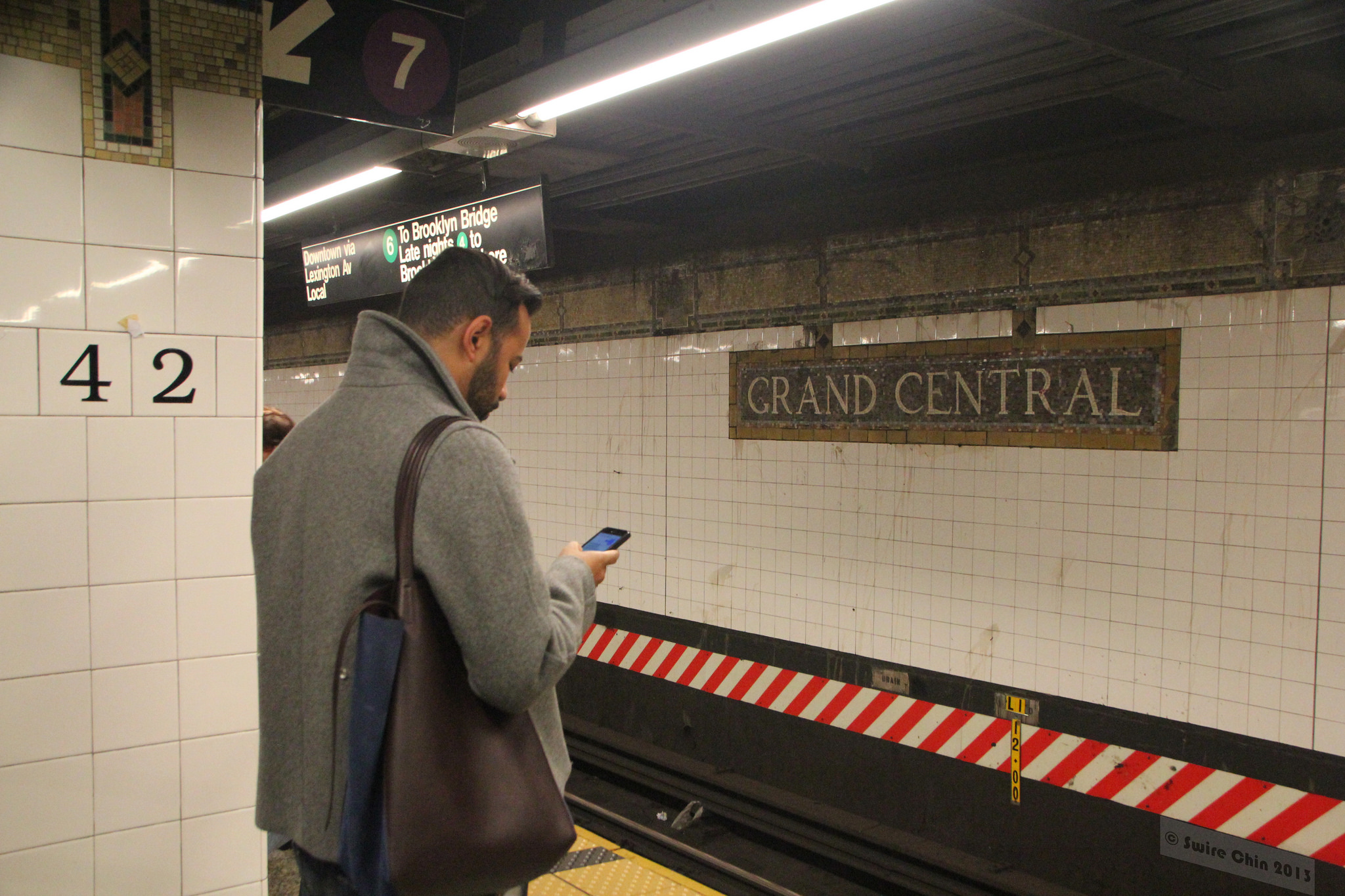 Arriving at the subway station, it was nearing 11:20 PM. Despite the time, I intended to do work when I got home. However, we ran into another friend on the subway platform, and together got delayed on the train ride. It was long past midnight when we arrived at our stop. Since the opportunity to finish work had passed, we went to a nearby pub.

I was presented with a final dilemma: my friends in North Brooklyn were no doubt still partying, and I didn’t want them to know that I had stayed out. But I wanted/needed to check-in, particularly as I noticed a precipitous drop in my Foursquare rating, having been confined at home studying throughout the week. I finally decided to check-in illicitly, using the “off the radar” function of the program. This function blocked my friends from seeing the check-in, but yielded fewer points on the game’s leaderboard. I recalled how I committed a similar deceit days earlier, taking advantage of faulty GPS to check into two places almost simultaneously to avoid suspicion that I was spending too much time out at one location, when I told my friends I was working. In both cases, I felt conflicted between a desire to engage with the program, to play its game, and the potential social ramifications. The points of transgression were numerous and caused me varied levels of unease. In describing “uncontrolled seeing,” Taussig mentions that “the secret (and hence the transgression that has to break through it) has in fact to be not only concealed, but revealed as well…in which transgression and taboo artfully play off one another in… an endlessly discharging circuit.” Both serious and playful, I hid my deception, my secret, within the workings of the game. I was simultaneously aware of multiple transgressions: that of staying out late, and also of my desire to codify the experience. Ultimately, these motions are enmeshed within a feeling of dismemberment, where my own being has been transfigured by Foursquare, a sacrifice of myself to the logic of the game.

What I hope to highlight in this brief account is the paradox that surrounds Foursquare’s effect on my daily experience, along with the relation between a social body and gamified socialization. The game provides new opportunities to transgress, a set of rules I find ways to break. I subvert and challenge these rules for greater glory within the game. The simple activity of being where I am becomes a point of competition, punctuating my thoughts throughout the day. Desirous of winning, I am willing to manipulate the rules of the game as I see fit, surveilling friends and “cheating” my GPS in order to score points. Foursquare itself, by supporting such transgressions, in turn caused me to transgress my own quotidian practices—taking me away from friends at their birthday party and disturbing the intimacy of a dinner with my wife. These minor transgressions are at once cast aside and yet perpetuate tiny moments of anxiety. A sense of doing wrong and the zeal of beating the system hang together in this transgressive moment. My experience of daily life offline becomes plagued by the question of whether I can “beat” Foursquare. Or is the game playing me? The game provides rules to live by and transgress, but never allows escape. When will I reach game over?