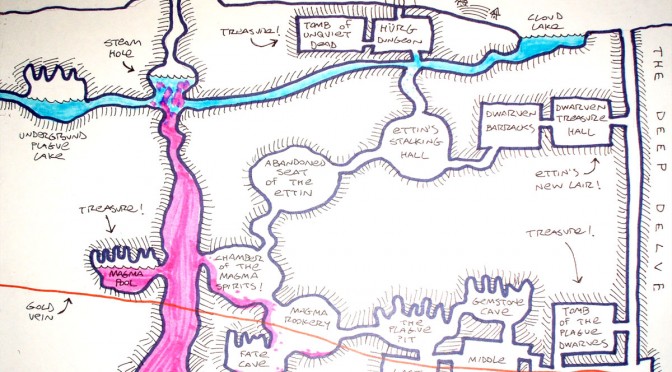 Although the infamous fantasy role-playing game Dungeons & Dragons may not seem to be overtly political, its structure and design belie the pervasiveness of the cultural anxieties at the time. In his essay about the ways that Dungeons & Dragons relates to a variety of cultural norms, Matthew Chrulew asserts that the game simulates the bureaucratic tropes of late capitalism in the ways that it affords players control of their environments through an endless set of tables, charts, and figures. Specifically, he argues that the maps packaged in the game are, the most fundamental of all the tools that the dungeon master keeps in their toolkit. “The map is a principle trope of modern fantasy fiction and FRPGs: accompanied by a detailed, descriptive key, it delineates the contours of the imaginary world, imparting both knowledge and mystery,” Chrulew writes. “The freedom of [player characters] to travel and explore the game-world varies, but all is finally determined by the pathways and delineations of the map.” Chrulew explicates how maps determine the action and functions of a site, and I further posit that they also tell much about the cultures that have produced them. While many maps that have been packaged in fantasy role-playing games focus on the wilderness, many others focus on the “dungeon,” which is a notably exotic locale. This essay suggests that the emergence of the “dungeon” as a representational fantasy trope in the 1950s/60s is symbolically related to popular perspectives on nuclear attacks circulating in Cold War America.

The dungeon setting is best fleshed out in the classic Dungeons & Dragons manual, The Underworld & Wilderness Adventures. Published in tandem with the other two core manuals in 1974, the original rulebook had a circulation of only 1000 copies. In this volume, game designers Gary Gygax and Dave Arneson introduce this interesting twist that had previously been absent from fantasy wargames Specifically, they encouraged players to plumb (and design) the depths of the underworld, as opposed to the more common terrain of the wilderness. This was a new addition to a genre that had previously focused almost exclusively on armies clashing in the traditional battlefield setting. Although the subterranean is often posed in opposition to aboveground terrain, there is a striking similarity between the unpopulated recesses of the underworld and the unpopulated barrens of the wilderness. The wilderness, though never considered safe in our fantasy imaginaries, is depicted as a particularly dangerous environment in The Underworld & Wilderness Adventures; at least as dangerous, if not more so, than the mines of a dungeon. Although about one fourth of wilderness encounters would be with men (as opposed to flying creatures, giants, lycanthropes, animals, or dragons), the types of men one might encounter were concerning, at best: bandits, brigands, necromancers, wizards, lords, superheroes and patriarchs could be encountered in the wilderness. Contrasted with the kobolds, goblins, skeletons, orcs, giant rats, centipedes, bandits, and spiders of the underground, and it becomes clear how Gygax’s wilderness was no safer than the underworld.

There are unquestionably areas that have been glossed over. While we deeply regret the necessity, space requires that we put in the essentials only, and the trimming will oftimes [sic] have to be added by the referee and his players. We have attempted to furnish an ample framework, and building should be both easy and fun. In this light, we urge you to refrain from writing [us] for rule interpretations or the like unless you are absolutely at a loss, for everything herein is fantastic, and the best way is to decide how you would like it to be, and then make it just that way.

The representational context of Dungeons & Dragons has undoubtedly become clear. The critters underground are just as alien and scary as those above ground, but, for the most part, those underground are purely imaginary, while real men above ground still perpetually engage in violence, skullduggery, and brutality. Furthermore, in all contexts, the fantastic populations below the surface could be controlled completely by interested players. But America in 1974 was an uncontrollable and scary place. Watergate had shown citizens that their government was not to be trusted, there was widespread rioting as the status quo of civil rights was challenged, and the population lived beneath the shadow of the Vietnam War and, even more chillingly, the atomic bomb. The dungeon was a fantastic retreat for a class of mostly white, male, suburban players looking to escape these cultural anxieties. The fascinating thing about the change of scenery offered by The Underground & Wilderness Adventures guide is that there are few precedents in the community built around this topic. Besides the aforementioned chapters in Lord of the Rings and The Chronicles of Narnia, there were few games that centered on subterranean locales, a trend that reflects how these wargaming communities had kept to the traditions of the wargame genre even when delving into fantasy role-playing games. So what could have motivated this deliberate and genre bending turn? In the absence of evidence, it is important to turn toward immanence, and consider some of the popular attitudes of the time around the topic of the Cold War.

Indeed, Sharon Ghamari-Tabrizi (2005) explains in her book The Worlds of Herbert Khan: The Intuitive Science of Thermonuclear War, that life underground was a leading suggestion for nuclear preparedness in the 1960s. Discussing “The Mineshaft Gap” – RAND strategist Herbert Khan’s suggestion that a post-nuclear America build sustainable communities in mines, made popular in his bestselling book On Thermonuclear War – Gharmani-Tabrizi explains that subterranean development, although heavily criticized and not necessarily popular, was a key discourse in Cold-War America, even being parodied in Stanley Kubrick’s Dr. Strangelove.