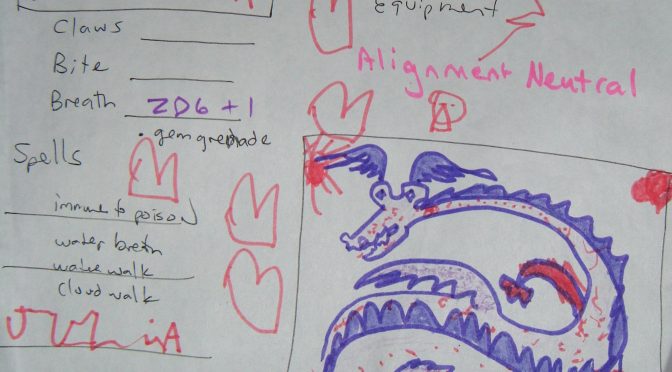 Editor’s Note: This is the first essay of many in a series of shorts entitled “Table Talk” intended to provoke conversation.  When we founded Analog Game Studies, our articles were almost exclusively short provocations intended to stimulate discussion around points that we felt were important to galvanizing the field. As the journal has grown, we’ve eschewed many of these short think-pieces in favor of longer and more traditional articles. Although long form articles are and will continue to be the bread and butter of the field, we value and miss the radical energy that short pieces bring to the conversation. Short pieces shake the foundation, help us find new perspectives, and relocate the center of conversation. We hope you enjoy reading this as much as we did when reviewing it.

Tabletop role-playing games (TRPGs) are complex sites of play, and implicated in the production of meaning and affective relationships, characterised by emotional-physical responses.1 Role-players are encouraged, through the structure and affordances of these games, to build such relationships with (their) game characters, supporting the development of serial narratives and experiences across multiple game sessions. In this short paper, I explore how these affective connections are built and maintained through, and in relation to, character (record) sheets, used in a range of games to specify, represent and ultimately capture and preserve game characters.

Materiality is centrally important to discussions of players’ relationship to tabletop role-playing games in particular,2 and recent work by Banks, Bowman and Wasserman has also noted the functional materiality and (semi)tangibility of digital representations.3For most players, the key relationship at play occurs between them and their in-game character(s); a relationship which recognizes the division of the two personas (player, character), even as it may also represent a substantial affective bond.4 During the moment of gameplay, there may be several sites of connection between player and character, manifest through multiple modes of material affordance, including figurines, character sheets and portraits, as well as through imagination.5 It is the character sheet, one of the more traditional and popular modes of character representation and connection,6 that concerns us here. 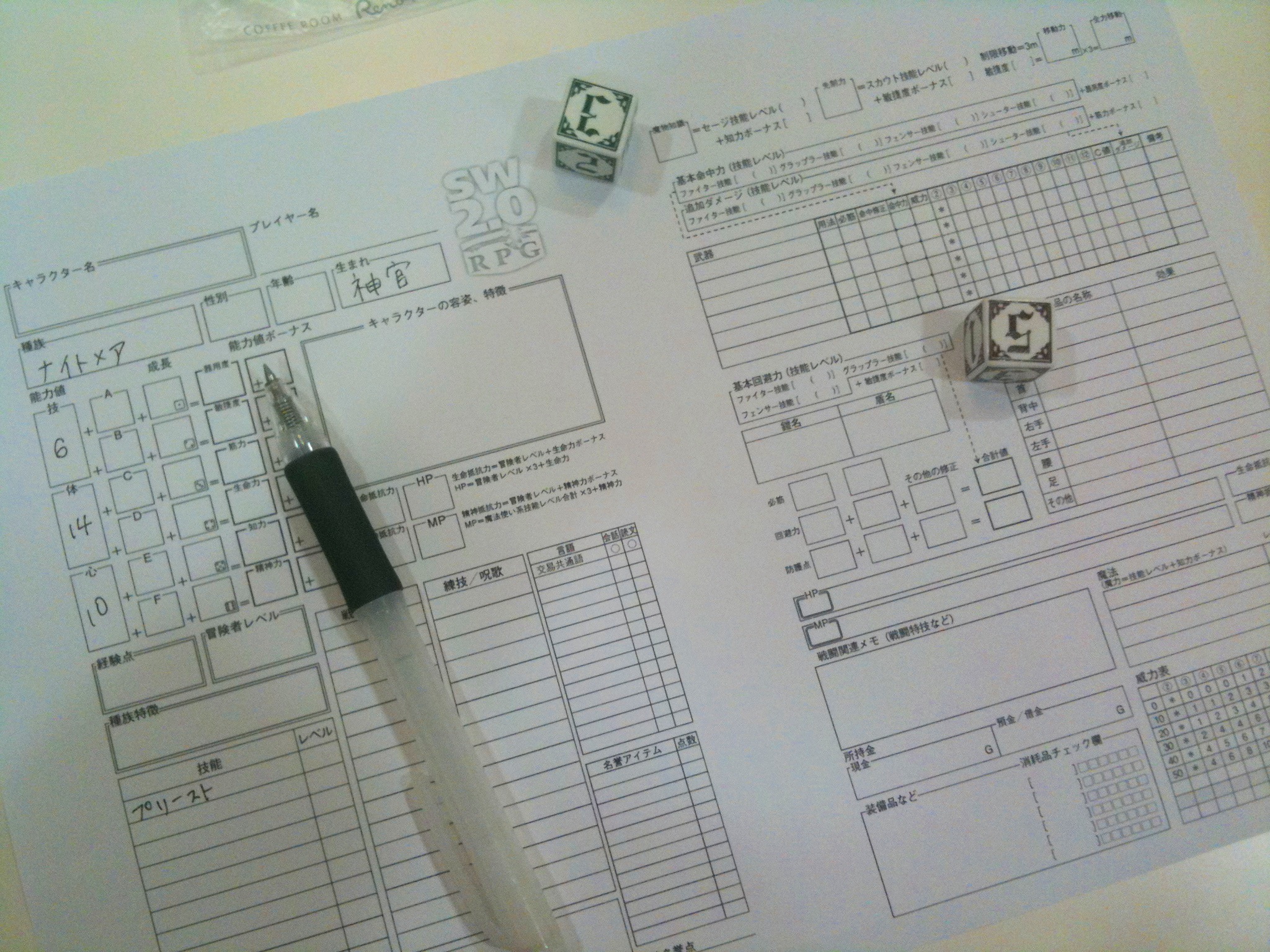 An example of a character sheet by Demi moriya @Flickr CC BY-SA.

Character sheets, as a significant component of the majority of role-playing games, both analogue and digital, have been addressed in a range of research which considers their place within the activities of gameplay and role-play. They are understood as a “focal point of player agency,”7 a key source of information – for “what is true” – in an RPG,“8 effectively an avatar for the character”9 and, if nothing else, “a special sheet of paper,” “similar to a CV.”10 Functionally, these sheets record both static and “dynamic” or “volatile” information;11 yet for many games (e.g. Dungeons and Dragons), the design of pro-forma and official character sheets focuses this information towards combat and acquisition, affording limited space for the affective information which players routinely seek to record – the character’s best friend, for example, or where they were born.12

As noted, a character sheet is one of a range of modes of representation of the character, and thus of points of connection between player and character during the moment of gameplay. Yet non-digital role-playing games are, as many authors have suggested, ephemeral:

The moment they end, at the point of completion, they cease to exist. Each participant has memories of the game from their character’s point-of-view, in addition to an assortment of props and costumes (live action role-playing games), character sheet and notes (table-top role-playing games, freeform).13

The character sheet, then, stands as one of the few enduring elements of the game post-play, notwithstanding suggestions that the sheets are, themselves, “an iconic bit of ephemera.”14 It is perhaps for this reason that, although there are multiple connecting points, research suggests a tendency for players to see character sheets as in some way receptacles for the characters themselves, going beyond the suggestion of sheet-as-avatar to recognize a more substantial connection: “that Character Sheet is Silvernose [the Elf],”15 sheet as character, then. And while points of connection such as figur(in)es may be brought out for other uses between game sessions, a character sheet remains linked to a single, specified character in a material-ludic relationship.16

As Evan Torner has suggested, prior to a play session, characters exist frozen on their sheets as “objects of sheer potentiality.”17 Of course, this is equally true after a session, with characters returning to their rest like Bagpuss’s friends, until next time. This is not to say that the mental model of the character, of which the sheet is a (or perhaps the) manifestation, is not subject to further exploration and amendment; but as noted already, the character sheet in some manner represents “truth,” and we might thus interpret unrecorded amendments as a form of imaginative fiction. The sheet serves, then, as an authoritative record of a moment of a character’s life, sedimenting information and growing with that character, as Rafael Bienia notes:

When the same character sheet is in use for several years, the changing character sheet expresses a certain age of a character that becomes a written account of the life and a material witness of the character beyond the narrative actors alone.18

This development may be manifest in stark terms: in Bienia’s case, an initial four page sheet became, over time, a twelve page sheet.19 Yet if this sheet “captures” a character both through representation and as storage medium (the frozen pause of out-of-game), we must be mindful that there is no certainty of a future session of play. The temporary pause, from week to week or month to month, may easily become permanent. Thus, while the game may have ended, the character’s story may not. And we must not forget that, for some characters, a given play session may encompass a more or less deliberate retirement, or the sudden end to a career in its prime.

How, then, can we think about these sheets, and the affective relationship they represent beyond the timeframe of a game itself? What, in essence, is the afterlife of these affective connections? The existence of online repositories of scanned character sheets attest that, for some at least, these sheets have an enduring value worthy of aggregation into what might be thought of as a personal archive or collection.20 Personal collections of popular culture represent an example of what Walter Benjamin called “the most intimate relationship that one can have to objects.”21 Through processes of collection, individuals build up not only a “tangible biography”22 but also an increasing affective connection with the objects thus collected. Such material, stored and, sometimes, shared, can be understood as a form of archive: partial, subjective and potentially inadequate,23 but curated and kept even so. These archives may problematize and push back against normative conceptions of archives as formal repositories of (usually) written materials, responding to institutional events and contexts. Personal archives often contain “the objects, ephemera, memorabilia and tactile ‘stuff’ that is most memorable, desirable or illuminating;”24 collections lent resonance “by the memories associated with them, and the personal experience invested in the event, and recalled through their contents.”25 Elsewhere, individual engagements may emerge from a chance rediscovery of something put or filed away and long since forgotten about, prompting both memory and contemporary reflection; the experience of one Reddit poster, for example, in “finding a 20-year-old character sheet and finally realizing why your gamemaster was so nice.”26 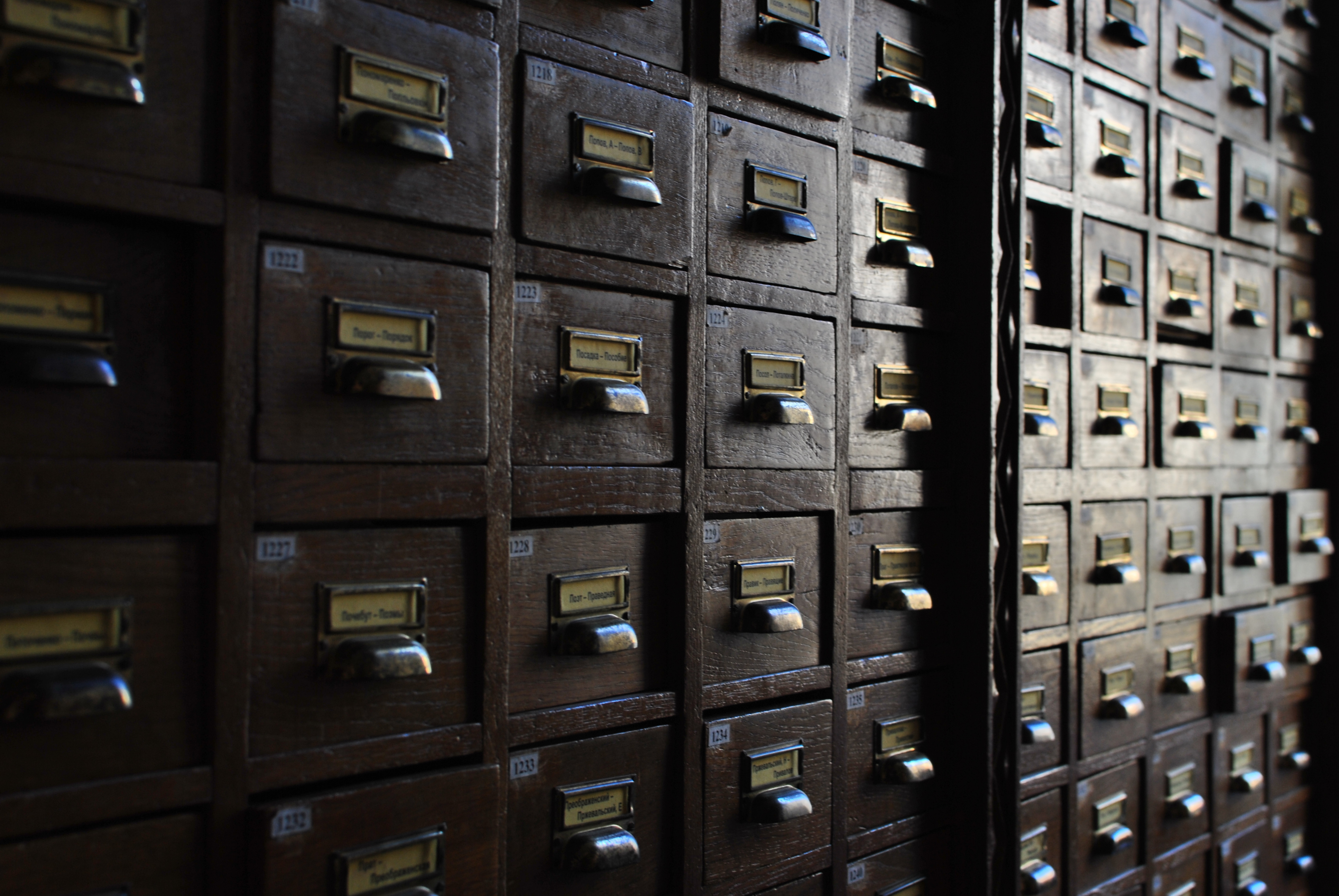 Behold! The power of the archive. By Carolina Prysyazhnyuk @Flickr CC BY-SA.

Our consciousness of the materiality of these sheets is not limited to the simple fact of their physical existence, however. As Bienia reminds us, these sheets are fragile in their own way, requiring and receiving care. Protective covers are used, damage through reinscription and erasure is minimized. “Old character sheets might show coffee stains, pencil notes with quotes from the game, doodles, and more – paper can turn yellow over time.”27 In this respect, as we consider the nature of an archive of character sheets – the material archive, which informs the aforementioned digital scans, posts and reposts – there is in fact something in common with any other repository of manuscripts. The care for the material, and delicacy with which its various sections see erasure and reuse, recalls the creation of palimpsests: much like parchment, official character sheets are expensive. To understand character sheets in this way allows us to appreciate still further the nature of the affective relations taking place.

As mentioned already, pro-forma sheets – commonly used or replicated – offer few affordances for the recording of the affective information which often animates the connection between player and character. Responses to this are commonly found either in the margins of the sheets or attached as supplementary material, evoking ideas of annotation and marginalia. Marginalia serve as paratexts, here to the main text of the functional, form-like aspect of the character sheet. The form relates the character to the game as a system, as a set of rules; the marginalia, in turn, articulate something of the player’s relationship to the character – those things the playerfinds interesting or important to note, both about the events taking place for their character and about that character’s richness of being, their “self-definition in and by relation to the text.”28 Marginalia, in historical manuscripts, also often served a mnemonic function, a means of committing ideas to memory through representations which offset the formality of a text by being rooted in everyday life.29 Here, they consort with the formal text to capture the affective relationship of player and character, as they make that character more substantial, “a unique personality with a mind of its own.”30 The character sheet, then, stands as a metaphor for, or representation of, a set of affective experiences and relations, which can be recollected through engagement with it as both text and paratext.

The character sheet is acknowledged as a major site through which players might connect to their TRPG characters, although it is one of only a number of different modes of engagement. Importantly, its specific material qualities allow it to extend the affective connection between player and character into the out-of-game space, and I argue it does so more successfully than other means of player/character connection. The specific materiality of the sheet allows it to serve a range of tangible functions, not only in building links between the social and diegetic worlds of the game,31 but also to contribute to the tangible biography represented by a personal (role-playing) archive.32 Notably, in the case of a character sheet, this is a biography both of player and character, and their affective relationship. Yet although the game affords and, indeed, encourages such relations, formal character sheets often support them less well, relegating them to the margins of record. In so doing, they establish a further relationship, in tension with the formal context of game record, which allows character sheets to serve a mnemonic function after the fashion of manuscripts with marginalia in traditional archives.

Nick Webber is Associate Professor in Media at the Birmingham Centre for Media and Cultural Research, Birmingham City University. He holds a PhD in Medieval History, and his research focuses on (video)games, cultural history and identity. His current projects explore the historical practices of player communities, and the concept of the culturally ‘British’ video game.