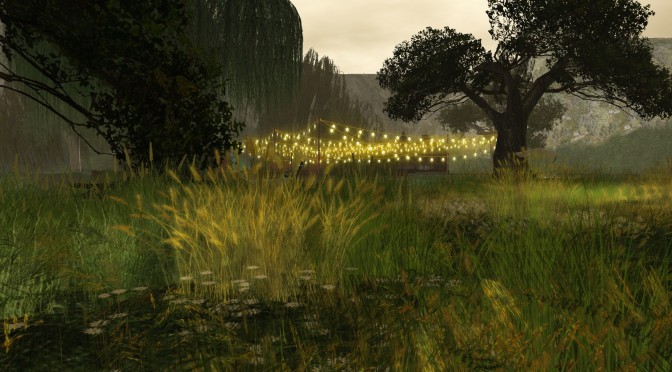 Live-action role-playing (larp) occupies a unique place among analog games, for it demands as much from players’ bodies as it does from their minds. It comes then as no surprise that many players find themselves in the situation of feeling confused, exhausted, and emotionally raw after a larp event.1 In fact, larpers frequently exhaust themselves in advance through the leisure labor of planning their costumes, character actions, possible outcomes, and interactions. Subsequently, the event itself often features what some would describe as “intense content” – dramatic interpersonal dynamics, improvisational comedy, combat, political struggles, problem solving, etc. Intense content is there by design in order to maximize the emotional impact of the game. The sheer amount of emotional intensity experienced in a short time frame can impact any given larper, regardless of whether or not they found the experience enjoyable.2

As with any high, the comedown can often feel shocking and depressing.

According to many larpers, the return to the “real world” can feel deflating. The mind must divest itself from the vivid social reality of the larp, and attempting to communicate with outsiders about the events of game can feel alienating. Petri Lankoski and Simo Järvelä have argued that role-playing immersion and emotional bleed between the character and the player are, in fact, cognitive processes and “natural consequences” of how “the brain works.”3 The emotional highs of game most likely have a hormonal component; endorphins, adrenaline, dopamine, serotonin, and oxytocin levels shift as the result of game stimuli. As with any high, the comedown can often feel shocking and depressing. 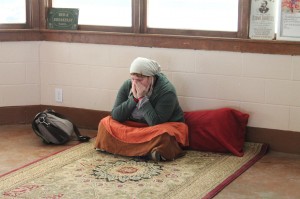 In-game photo: A former slave grapples with the emotions arising from the arrival of an arrogant slaver in town and a potential slave auction.

The drop after an intense event may trigger imbalances already in place.

One of the most common strategies is to tell war stories and/or hold a debriefing afterwards, both of which constitute a reframing of the larp material. Larpers often process the experiences they had by sharing memories of what transpired in the game with one another. War stories tend to valorize, intellectualize, or make humorous moments that occurred in game, whereas debriefing tends to take emotional content seriously in order to process and move through it.8 Both forms of “reframing” are important for larpers, allowing them to validate their experiences in the eyes of others. Storytelling also permits larpers to structure the oft-chaotic experience of a larp, drawing together a cohesive narrative that is easier to master.9 War stories can be found anywhere there are larpers. However, those who choose to debrief are perhaps best able to do so in small groups with trusted friends and/or in a structured fashion with a moderator. Some larpers also assign each other debriefing buddies, who promise to contact each other in some fashion later. These debriefing buddies are expected to remain available to each other long-term as they share feelings that come up days, weeks, or months after the larp.10 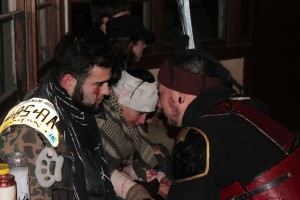 In-game photo: In the zombie survival game Dystopia Rising, a character comforts a couple who just experienced a miscarriage. Such experiences can leave lasting emotional impacts.

Adapted from psychotherapy, some larp circles also employ the process of deroling to recover from larpers’ adoption of an alternate persona for long periods of time, which requires a different frame of reference. Regardless of whether a larper’s “real” persona is similar, pleasant and unpleasant in-game memories, thoughts, and emotions persist long after the larp has ended. Such thoughts, emotions, and experiences may bleed-out into one’s daily life.11 Some larpers thus perform de-roling rituals to avoid problematic forms of bleed. These de-roling rituals vary in activity and scope, but include: taking off a piece of one’s character’s costume and placing it in a circle, saying goodbye to the character for a time;12 thinking of one or more aspects of one’s character that one admires and “taking” it with them; thinking of one or more aspects of one’s character one dislikes and wishes to leave behind;13 speaking about one’s character in the third person during war stories or debriefing to emphasize a sense of distance;14 and making sure to interact with all the people from a larp both in-character and out-of-character to emphasize the distinction.15

Other larpers forego the angst and throw a party instead. Oftentimes, relaxing pre- and post-game social events unaffiliated with the game fiction help players connect with one another and relieve post-game depression. These social events include MeetUps, “afters,” dinners, parties, coffee dates, online discussions, etc.16 Socializing with one’s fellow larpers actually tends to increase the feelings of emotional safety in the larp space, so that players get to know one another well and can better distinguish between in-game and out-of-game actions. Also, interacting in new contexts tends to deepen bonds of friendship that already get forged at the game. Social events give larpers the space to have conversations with one another that might not otherwise take place, working through conflict and increasing trust.

Some players further emphasize nurturing their physical and emotional well-being after a larp, taking care of mind and body. They insist upon players sleeping, eating, bathing well, and not pushing themselves too hard. Human touch is also said to be helpful, if one feels comfortable with hugs.17 Depending on the intensity of the larp, sometimes people can take days to recover. For the mind, some players find it helpful to write about their experiences after events. Players may share these memories or keep them private. The mere act of committing events to paper helps individuals externalize and order their experiences in a meaningful way.18 Players may also seek to simply distract themselves, moving from one immersive activity to another: watching a few episodes of a television show, reading a book, playing another role-playing game, and so forth. Transporting the frame of reference from one to another may smooth the transition for some players.

Lastly, one effective strategy to ease the transition back to the mundane world is the act of showing gratitude to the other larpers and the organizers themselves. This act of storytelling can boost morale. It dignifies the presence of all involved, and lets everyone know that they mutually enhanced each other’s experience. The organizers in particular expend a great deal of time and energy to create a fulfilling experience, and players who acknowledge that effort may find the overall experience of returning to life less deflating. 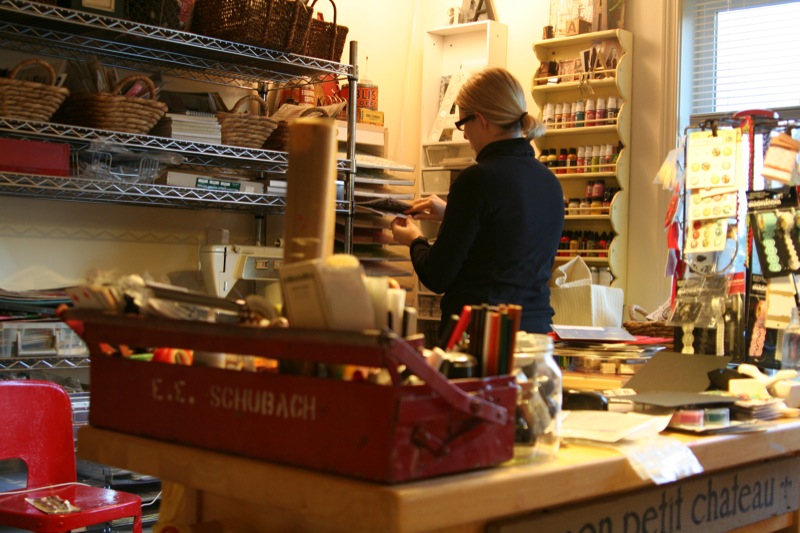 Return to the everyday. Photo by Ali Edwards CC BY-NC-ND.

Not all players experience post-larp depression, however. Some fluidly transition back to their daily lives. Other participants have noted an inverse phenomenon called “post-larp charisma,” in which players are fueled with an abundance of creative energy.19 Others still object to the use of psychological terms such as “depression” or the more conversational phrase “post-larp blues,” preferring to refer to the phenomenon as “post-larp” to avoid the connotations of mental dysfunction.20 Responses to intense game events can vary and no one strategy works for all people. The most important point remains, however: the effects of larp on the players are often too significant to ignore, as are the impact of the techniques outlined here.

This essay was written by Sarah Lynne Bowman and Evan Torner.