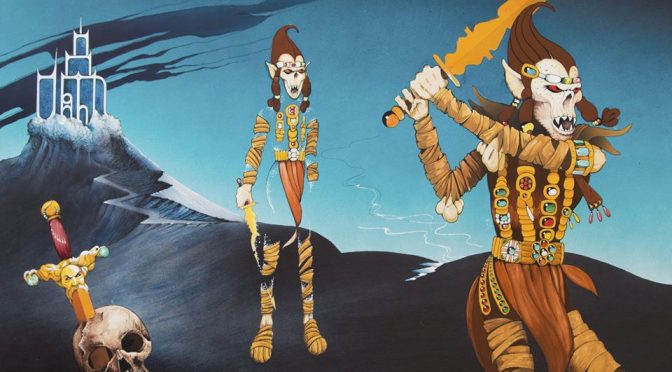 This special issue of Analog Game Studies examines the Fiend Folio: Tome of Creatures Malevolent and Benign (Turnbull 1981) in its historic and contemporary significance to game cultures and game design. Fiend Folio was an anthology of monsters published in 1981, the fifth official hardbacked rulebook of TSR’s Advanced Dungeons & Dragons (AD&D). It was the first TSR publication that was led by its newly instituted UK branch. The source of many of the monsters in the Fiend Folio was a regular feature in the London-based periodical White Dwarf, ‘the Fiend Factory,’ which published homebrew monsters from the campaigns of its readers.

The diversity of perspectives created by multiple authors, along with the monster illustrations from White Dwarf’s in-house artists of presents a strikingly different vision of AD&D from the official ‘Gygaxian’ vision of the first four rulebooks. However, the Fiend Folio continued to entrench many of the well-established and problematic views that were espoused in earlier materials for AD&D and original Dungeons and Dragons (Gygax & Arneson 1974). Views that continue to reinforce a culture of hegemonic white masculinity in game design today.

The Fiend Folio was met with substantial public criticism from within TSR. In issue 55 of Dragon, TSR’s official magazine, contributing editor Ed Greenwood wrote a four-page negative review that characterised the rulebook as a “disappointment” (1981, 6). This special issue aims to consider how Fiend Folio failed to meet expectations, and disrupted and challenged ”common sense” publication norms and approaches to game design by exploring 1) the tensions between world-building and technical challenge in monster design 2) the role of unconventional and unusual monsters in role-playing games and game cultures 3) the role of art and illustration in fantasy world-building.

Work that approaches these issues from a critical race perspective is particularly welcome. Given long-term concerns about racism and race representation in Dungeons & Dragons and the recent ill treatment of non-white employees at Wizards of the Coast, the Fiend Folio provides a lens into the complexities of white reactionary fandom in early role-playing games. The problematic concept of ‘race’ in the character design of Dungeons and Dragons (D&D) is established (Garcia 2017; Hibbard 2019). The controversial Drow (as Elf, Dark) was one of the monsters published in the rulebook, and other creations demonstrate elements of the identified orientalism of early Dungeons and Dragons (Trammell 2016). The Fiend Folio offers the opportunity to extend the critical analysis of AD&D by focusing on the role of monsters. Recent scholarship has opened important trajectories for examining how monster design can embed problematic world views (Stang & Trammell 2019), and is demystified, made mundane and knowable through containment within the rules (Jaroslav Švelch 2018).

Perspectives that draw on feminism, disability studies, gender studies, indigenous studies, queer studies and critical whiteness studies are also encouraged. Hegemonic norms of whiteness, masculinity, able bodiedness and cis heterosexuality saturate the monster designs submitted by the Fiend Folio‘s contributors, artists, and editors. These have had a broad, multi-decade impact on how monsters are conceived of in games and gaming culture.

Please contact the editor of the special issue at thomas.apperley@tuni.fi if you have questions about your potential submission.

Jaroslav Švelch 2018. Encoding monsters: “Ontology of the enemy” and containment of the unknown in role-playing games. In the edited proceedings of The Philosophy of Compute Games Conference, Copenhagen 2018. http://gameconference.itu.dk/papers/09%20-%20svelch%20-%20encoding%20monsters.pdf